I meant to post this last week, but forgot to actually press the ‘Publish’ button.

There are a few photos that really showed me what a full spectrum camera could do, and the merit of taking photographs outside the visible range. This is one of them; it showed me the possibilities of a near-infrared camera.

When I visited Kluane National Park, I had only had a full spectrum camera for a few months; this camera was a modified point-and-shoot Panasonic Lumix. I only had two infrared filters with me on the trip; a 760 nm Zomei and an 850 nm Zomei filter, so I didn’t compare photos at taken at different spectra.

Kluane National Park is part of a World Heritage site, along with adjoining parks in Alaska and British Columbia. There are many multi-day trails, but only one front country campground, at Kathleen Lake.

Here was the lake when I woke up in the morning- the weather was changing, and the clouds were coming in, but it was still a beautiful morning(by afternoon it would become overcast)

The depression in the mountains is called the King’s Throne, and you can hike to it.

Here is the same picture, broken into the blue, green, and red channels. 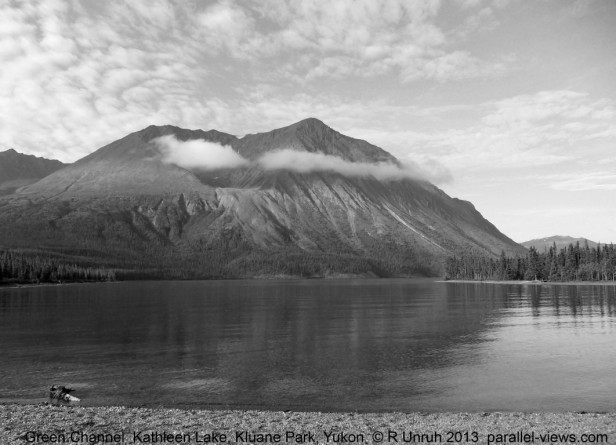 There’s not much to mention about the individual channels that I haven’t mentioned before; the sky in the blue channel is bright enough to mask the clouds, and the mountain in the background is hazier, like usual.

Here is the lake and mountain in 760 nanometre infrared. I did adjust the contrast for this photo- the unaltered photo is at the top of the post. 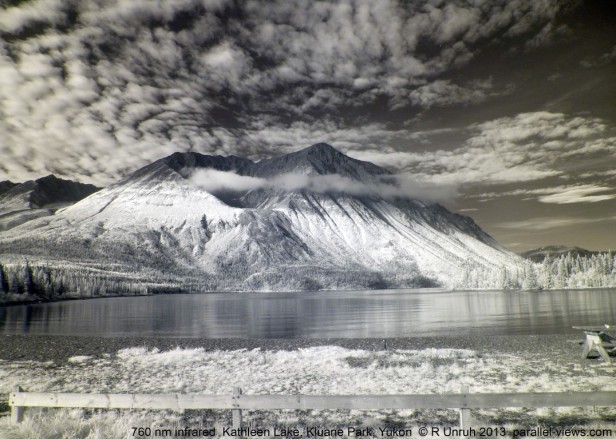 Like I said, this is one of my favorite infrared photos, and showed me the potential of taking them in the future. The hints of colour that remain give it a unique quality, and the white mountain looks surreal.

I would attempt hiking to King’s Throne later in the day, and will show some photos of the hike in a future post.