Hiroshima Peace Park. It’s a beautiful, peaceful park now, and a World Heritage site since 1996, but it memorializes a horrific past.  On August 6, 1945, the first use of a nuclear bomb during warfare occurred, being dropped on the city of Hiroshima. The blast destroyed 12 square kilometres of the city, and killed over 80 000 people in the immediate blast, with thousands more dying in the aftermath. The museum near the epicentre of the blast has a model of the city before and after the explosion, as seen below(in two dimensions). 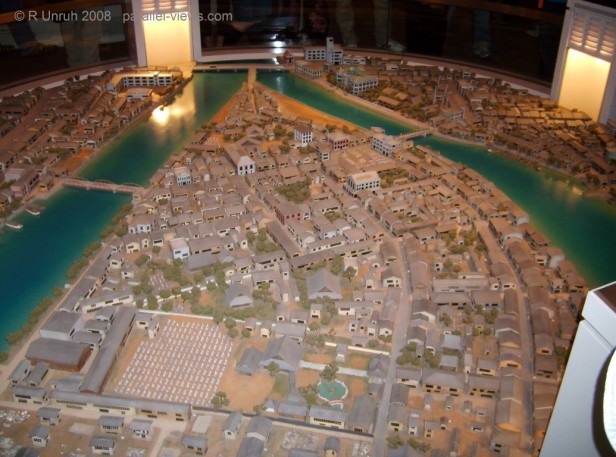 For reference, the most well known surviving building, the A-Bomb Dome(genbaku domu) is at the very top of the photo, on the right side of the river. It was 160 metres from the hypocentre of the blast(the point directly beneath the blast), and is the closest standing building. A photo of the structure is at the top of the post.

After 70 years, Hiroshima is again a vibrant, thriving city; the only remnants of the explosion are those that they chose to preserve.

Only one photo this time- this was taken back when I was just starting taking 3D photos. The Memorial Cenotaph is in a direct line between the museum(not visible) and the A-Bomb dome. A chest within the cenotaph contains the names of those killed by the nuclear explosion. beyond the cenotaph is a pool of water and the torch for the Flame of Peace(which was burning, but wasn’t visible in the photograph due to the bright day). The A-Bomb dome is visible in the background.

On August 9th, It will have been 72 years since the last time an atomic weapon was used in war. Hopefully, the memory of the two bombs that were used will prevent a third from being used.