I’m very interested in UNESCO World Heritage Sites. I’ve only been to 40 of them(including almost every site in Western Canada and the USA), but would take any opportunity to get that number higher. I have planned trips around seeing as many  World Heritage sites as I can, I check the new listings every year to see if there are any new sites inscribed that I visited in the past, and I love to read up on the sites before I travel to them. I have a separate photo album solely devoted to the sites I’ve been to. I’m a little obsessed, is what I’m saying.

…So I have absolutely no way of excusing the fact that I visited a World Heritage Site without even knowing it.

Aztec Ruins National Monument has no connection to the Aztec culture(the first Europeans settlers in the region THOUGHT it did, hence the name). It is located in the town of Aztec, New Mexico, and is about 70 miles north from Chaco Culture National Park. The Aztec Ruins site is much smaller than Chaco Culture, only consisting of one large structure and a few smaller sites. 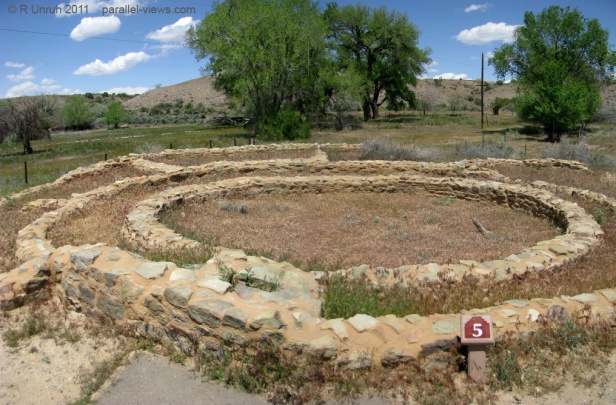 The Hubbard Tri-wall site(pictured above) is the one smaller location open to the public. It consists of three concentric walls and 22 small rooms around a central kiva. This was an unusual design for the culture, and it stands out.

The bulk of the time I spent at the National Monument was in the large site, called the West Ruin(there is also an East Ruin- again, it is off limits to the public). There is only a single route that is open to explore the ruins, but the route weaves in, out, and around the structures. 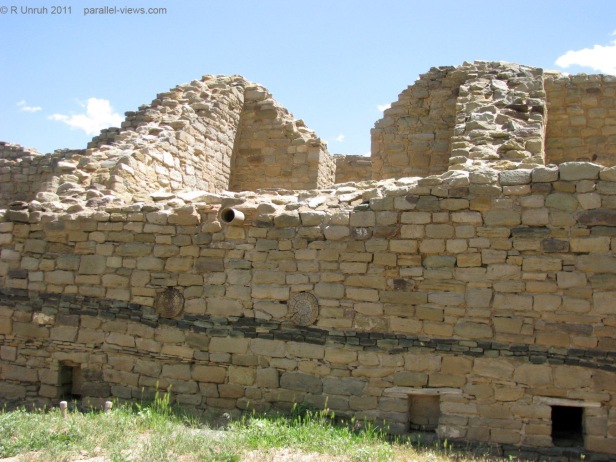 From the path around the outer walls, the detailed stonework is obvious. The original wooden supports peek out from the wall. The not-as-original plastic drainpipe does as well. 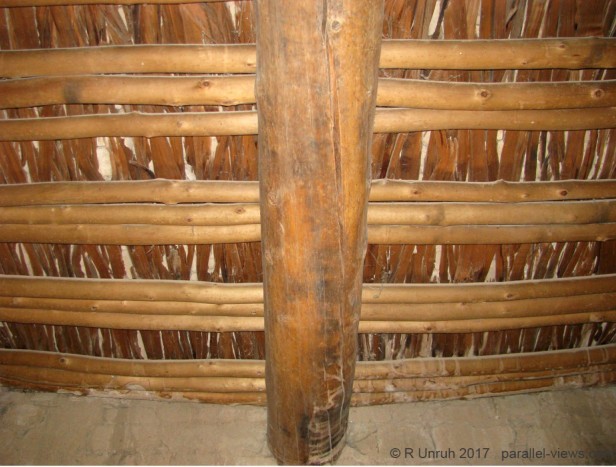 After walking along the outer walls, the interpretive trail goes inside the structure. Like in Chaco Culture National Park, several rooms are intact, with their original wooden ceilings still holding up the roof centuries after being abandoned. 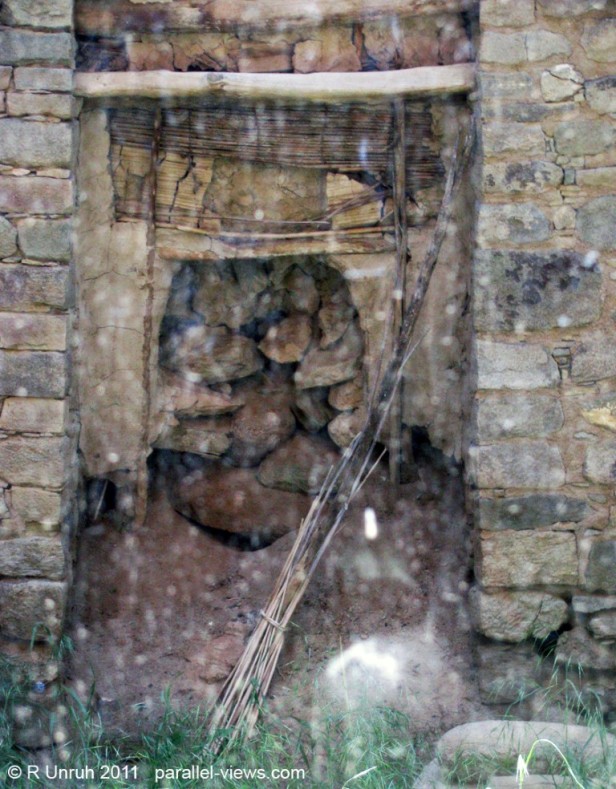 Even more impressive, the willow mat used to cover a doorway is also partially intact. The quality of this photo is poor- the mat is protected from vandalism, and the plexiglass window was dirty. After trying several times to get a good picture and using every trick I knew at the time, this was as best a photo as I could take. 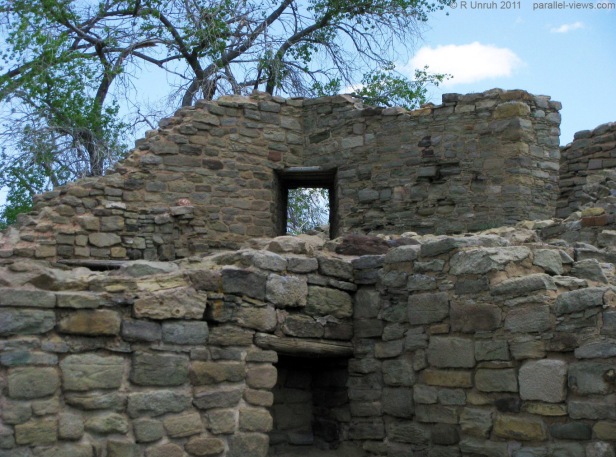 Entering the open plaza, a doorway built into the corner of the structure can be seen from above. 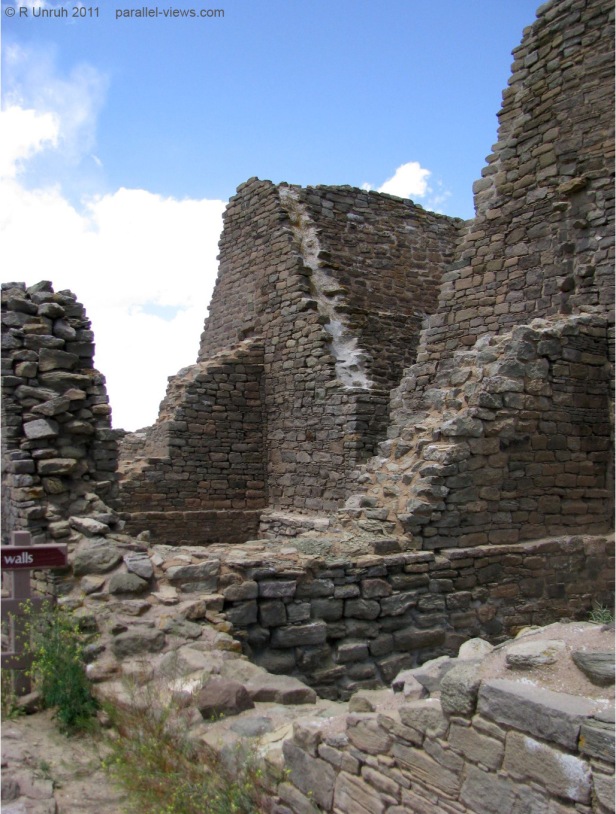 The central plaza gives an idea of just how tall the West Ruins would have been when in use. It is estimated that the ruins once contained over 400 rooms, and could have been up to three stories tall. 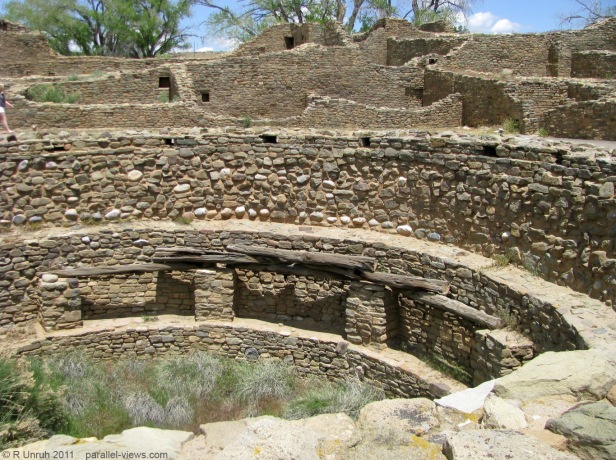 In the plaza, the ruins of a ceremonial Kiva stand out. 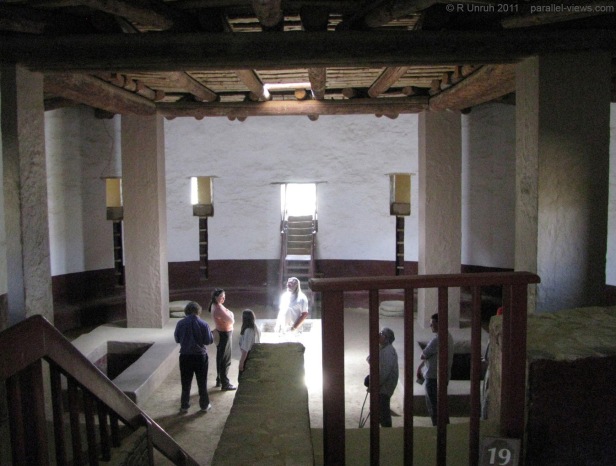 There is also a reconstructed Kiva, which gives an idea of how the site would have looked at its peak in the 1100s.

So, how does it compare to the other component of the UNESCO site, Chaco Culture National Park?

… Well, If I had to choose one, it would be Chaco Culture National Park in a heartbeat. Aztec Ruins is a smaller, more ‘controlled’, guided experience; Chaco Culture gave me a sense of being able to explore freely(even if many parts of the sites are off limits) and explore at my own pace. On the other hand, if mobility is an issue, or if you aren’t comfortable driving on a rough, isolated road, Aztec Ruins would be the better choice

If you don’t have to choose, however, I’d recommend both, and to do Aztec Ruins first. Although the ruins aren’t as expansive or open as Chaco Culture, I would say that the interpretive trail is much easier to follow(both physically and in the sense of reading the relevant information), The museum at the site and the reconstructed Kiva are worth visiting, and Chaco Culture has no comparable interpretive exhibits (at least, not when I visited in 2011). After seeing them, I had a better understanding of the architecture and culture, and appreciated the ruins of Chaco Culture National Park much more than I would have by going in ‘blind’.

As well, and this shouldn’t be overlooked in such an isolated, arid region, Aztec Ruins is next to a small town, with a few other small towns very close. Chaco Culture National Park is fairly isolated- visiting Aztec Ruins also gave me a chance to get supplies and check my gas, oil, and tires before venturing out on roads that were an adventure in themselves. 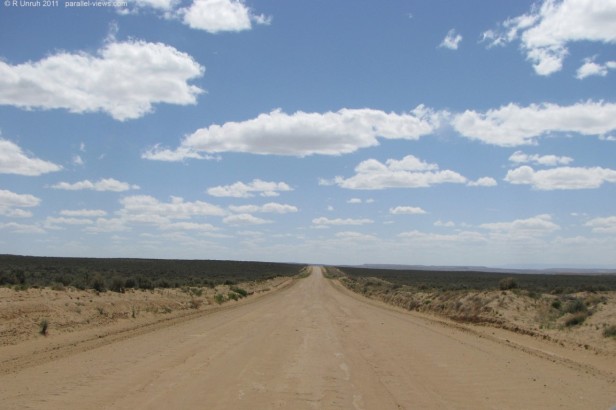 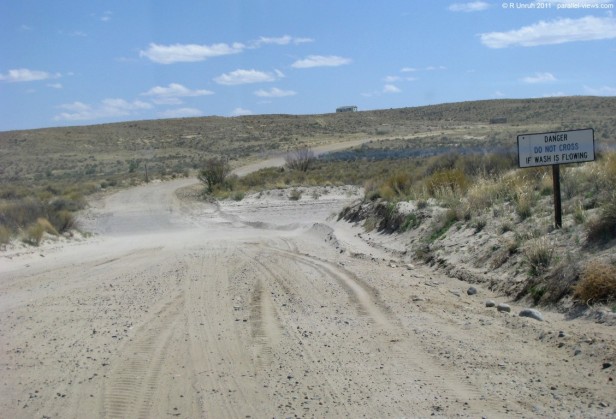 The above photos were taken with a Canon SX100 IS Camera.