Red/Cyan 3D glasses are needed for this first three photos of this post(and the photo above). There are some 2D photos near the bottom.

I’m not going to say these photos are unique- I think anyone with an interest in 3D photography must be legally obligated to take similar photos at some point.

Arches National Park, in Utah, has some spectacular sandstone formations; the arid landscape and sparse vegetation of the region is an is an iconic part of the United States. The sandstone buttes and arches in and around Arches National Park have been seen in dozens of films, and are what many people picture when they think of the Western genre.

As a northern Canadian, I found mid-May the perfect time to explore the park(as well as the ‘sister’ parks, Canyonlands National Park and Dead Horse Point State Park). The temperature was tolerable(although it had been a colder than normal spring), and as long as I had a lot of water, I could enjoy hiking in the heat. As  the school year wasn’t over, the parks were quieter than they would have been in summer.

The first picture isn’t actually in the park I took a photo of the Monitor and Merrimac Mesas on the roadside when driving to Dead Horse State Park. Both are named after the Ironclad warships of the American Civil War. The Merrimac is on the left, and the Monitor on the right. As they were on the horizon, this photo doesn’t really make them pop out in 3D. I was still learning how to find the correct distance between the right and left photos to increase the 3D effect of distant objects.

Within Arches Park, there are many amazing features. I think the two best known features are Balanced Rock, which can be seen from the roadway… 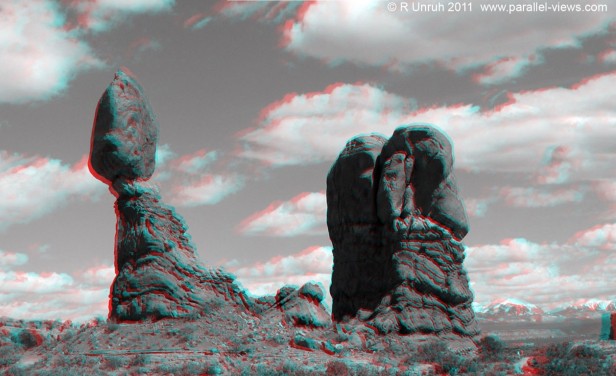 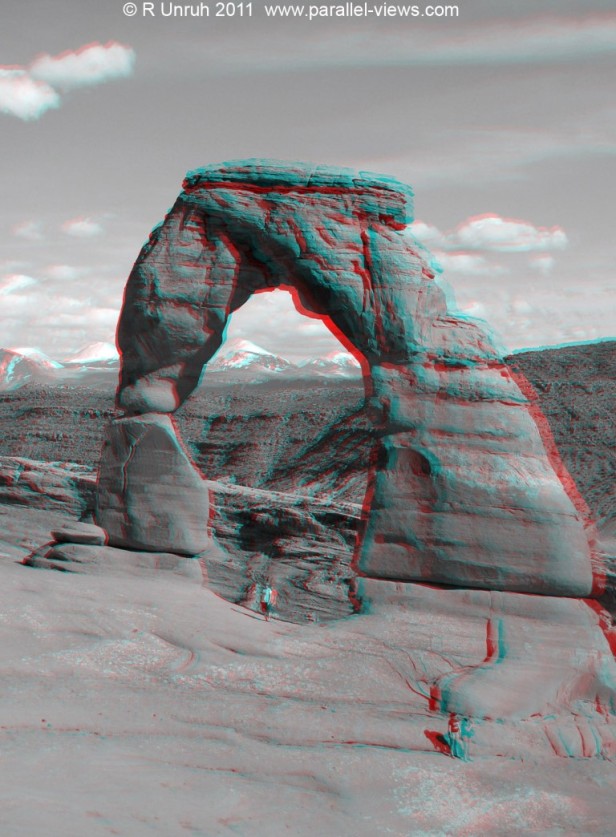 The rest of the photos are in 2D, so you can take the 3D glasses off.

The Arch can be seen high above the road from a parking area, but for the best views, a three mile hike climbs right up to the Arch(and to the spot I took the above photo). The hike is listed as difficult, but with the cooler weather, I found it fairly easy. As long as you don’t mind a constant uphill slog, and a few steep dropoffs along a wide trail…

…there was no problem reaching the top of the trail. Again, though, the weather was the major factor here. If I had been there during the heat of summer, I’d probably have been exhausted by the hike.

One last photo(2D again), taken while leaving the park in late afternoon. As the shadows grew longer,  I took one last look at the Courthouse towers from the road. It was still lit by the setting sun, while the road was covered by shadow. 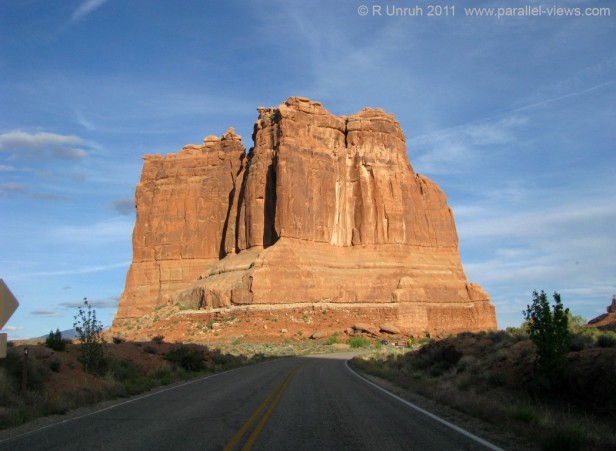 I’m hoping to return to the park this summer; if I do so, I’ll have more photos to send along.