In 2011, I took a road trip through the southwestern USA. I’m not sure why I took a detour to this National Monument (I had never heard of the park before), but I  saw the park sign, and took a half day to visit it. Hovenweep National Monument is located on the border between Utah and Colorado. My photos were taken on the Utah side of the park, around Little Ruin Canyon.

Hovenweep(meaning Deserted Valley in the Ute and Paiute Languages) is a pre-contact archaeological site; several villages once existed in the area, dating from around the 13th century and earlier. These villages were built by the Ancestral Puebloan culture, before being abandoned in the late 13th century. The ruins are still standing, and are still impressive over 700 years later. I think the park is much less well known than Mesa Verde National Park, and is therefore less busy. It is only an hour away from Mesa Verde by car, so you can visit both easily in a single day.

The structures themselves are mostly named. Keep in mind that the names don’t necessarily reflect the actual use of the buildings from(Hovenweep Castle was probably not an actual castle); the ruins were named in English in the recent past as a way to refer to the individual structures. I’ll be using these names when describing the photos. All of these photos were taken with a single Canon PowerShot SX100 IS camera; for the 3D photos, I took to separate photos and combined them later.

The 2D photo at the top of the post shows three of the Hovenweep structures. Eroded House is on the lower right side, built under the boulder in the canyon. Directly above it is Rim Rock House. To the left are the Twin Towers. 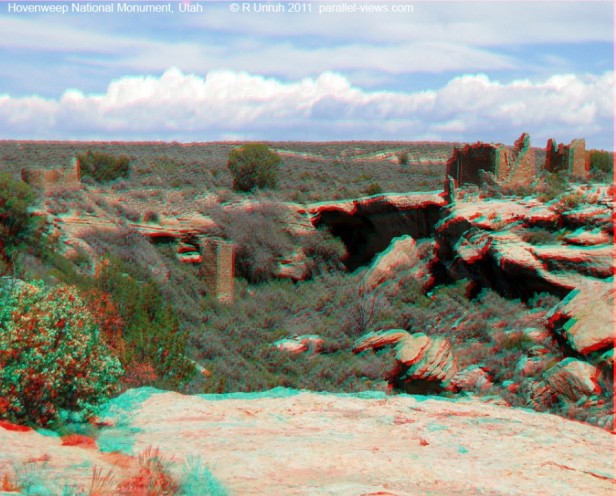 This 3D photo was taken from a viewpoint over Little Ruin Canyon, and shows several ruins. Square Tower lies in the canyon. on the edge of the canyon, Hovenweep Castle is on the right side; Hovenweep House is on the left.

If you’re wondering why the photo is in black and white as oppose to colour, there isn’t any artistic reason, just a practical one. The sky was the wrong shade of blue in that direction… which, now that I think about it, sounds like a really dumb explanation. However, it is a valid reason. The sky’s colour almost perfectly matched they cyan colour of 3D glasses. As a result, looking at it with the glasses was very uncomfortable. It looked black out the red side of the glasses, and white from they cyan side, and the mismatch made the entire photo hard to see. 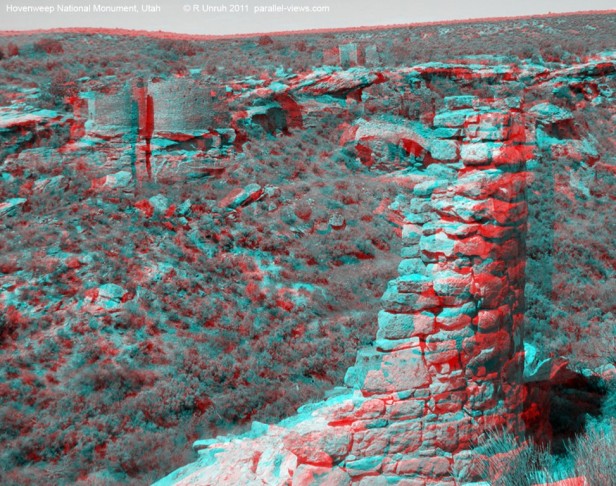 Another black and white photo, for the same reason. In the foreground of this photo is a rounded ruin that I think is part of the Stronghold House structure, called Stronghold Tower. Eroded Boulder House and Rim Rock House are directly behind it, and the Twin Tower structure is to the left. 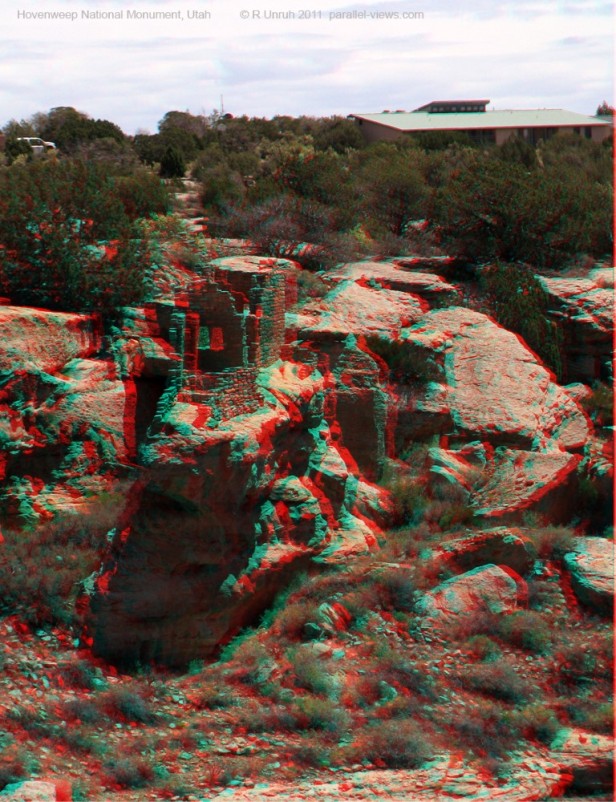 This last photo is of Stronghold House. The structure is on a rock shelf that has separated from the canyon rim. Behind it is the (modern) visitor center.

If you want to know more about the ruins, or see where they are situated around the canyon, a map of the Little Ruin Canyon sites can be found as a PDF file here. The file also has brief descriptions of all the major sites in the canyon.