My last post was on the Rapids of the Drowned; This post is in the same vein.

The Rapids of the Drowned are the last of the four major rapids on the Slave River near Fort Smith. The Cassette Rapids are the furthest upstream, followed by the  Pelican Rapids, the Mountain Rapids, and finally, the Rapids of the Drowned. The three that I visited(I never reached the Pelican Rapids) were all very similar; they are all wide, shallow stretches of the Slave River, right on the pink granite of the Canadian Shield. None of the three rapids look too dangerous, but looks can be deceiving!

The Cassette Rapids are, according to the Northern Life Museum in Fort Smith, named after a cassette, a waterproof box used to transport items during the fur trade. An attempt to traverse these rapids supposedly resulted in the loss of the cassette containing the Hudson’s Bay Company payroll.

These rapids are accessible from the community of Fitzgerald(Fort Fitzgerald in some maps), Alberta. The community is about 25 km from Fort Smith, and is not connected by road to the rest of Alberta(except for the winter ice road). The only road is through Fort Smith and the Northwest Territories. As far as I can recall, There are no stores or services in Fitzgerald, and  less than a dozen residents living there according to the 2015 census. A short trail from the community brings hikers to the edge of the rapids. 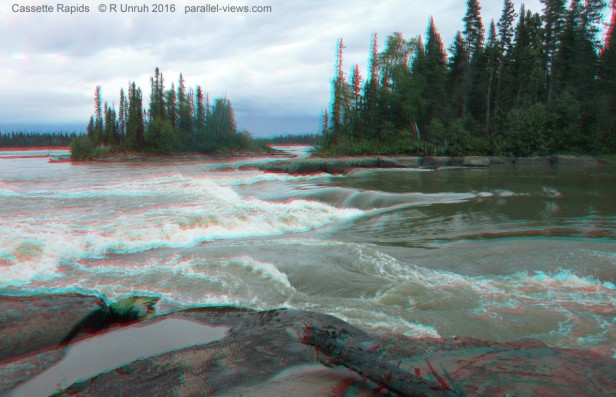 Next are the Pelican Rapids, named after the pelican colonies in the region. Like I said, I never visited them.

The Mountain Rapids are accessible from a short drive off the road connecting Fitzgerald and Fort Smith. Both they and the Pelican Rapids are in Alberta. The Mountain Rapids are named for the  peninsula that sticks out into the rapids. The edge of the peninsula is more a hill than a mountain, in my opinion, but as the land is so flat, it is a prominent landmark.  The peninsula was used as a portage by the fur traders to bypass the rapids; a steep trail rose 50 metres, before descending to the other side of the rapids. I walked from the portage trail along the banks to see the rapids themselves. They are noticeable at the top of the river in this photo: 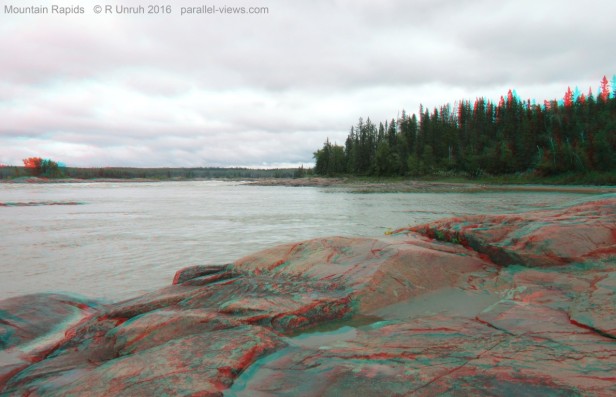 … and this is what they look like from the closest point on the shore:

Finally, back to the Northwest Territories’ Rapids of the Drowned. I already wrote about them in my last post, so won’t say much more. The blue sky in my photo seemed(in my opinion) to affect the quality of the 3D photo- it matched the cyan colour of the anaglyph too much. IT wasn’t as bad as some of my other photos, but I’m including the following photo in both colour and greyscale. And yes, the white spots are pelicans. Too far away for the 3D to stand out, though.

These photos were taken with two Canon SX600 HS cameras, and combined on my computer.