Wood Buffalo National Park is Canada’s largest park, and one of the largest in the world. At 44,807 km² (17300 miles²), the park is vast, and is largely undeveloped.  The park was created in 1922 to protect the collapsing bison populations; since then, the bison have rebounded, and are abundant within the park. The park itself has expanded over the years, and now crosses the border between Alberta and the Northwest Territories(although I’d have to say the Alberta side is better developed for visitors, with an access road, campground, and several marked trails).

The Salt Plains might be the most scenic area of the park, and is easy to reach.  A short drive into Alberta from the town of Fort Smith brings you to the lookout over the plains.

A short trail(visible on the bottom right) takes you down to the plains themselves. They have several unique features- salt from ancient seabeds lies deep underground; water dissolves the salt, bringing it to small springs on the surface.

These salt springs saturate the ground with salt, but they also join to eventually form the Salt River, an actual saltwater river hundreds of kilometres from the ocean.

The level of salt in the plains can be deduced from the vegetation growing within it. Trees grow in the regions with the least salt in the ground. As the salt concentration increases, fewer plants are able to tolerate the soil. Smaller bushes and grasses survive where trees cannot. At even higher salinity, only a few plants survive. The most notable is red samphire, which is responsible for the red colour in the above photos. This plant thrives in extremely salty environments, and the salty taste reflects that. red samphire is a small plant, ranging from the size of a finger to a bit over a foot in height.

At the highest salinity, not even red samphire can survive, and the ground is bare. The change in vegetation and unusual colour makes for unusual photos.

The salt plains also attract animals- they have a year-round natural salt lick, and access to minerals that will help them survive the winter. The mud of the salt plains holds footprints well, and evidence of the abundant wildlife can be seen on the ground. As far as actually seeing the wildlife, I was out of luck on my visit- the only animals I saw were some Canada Geese. 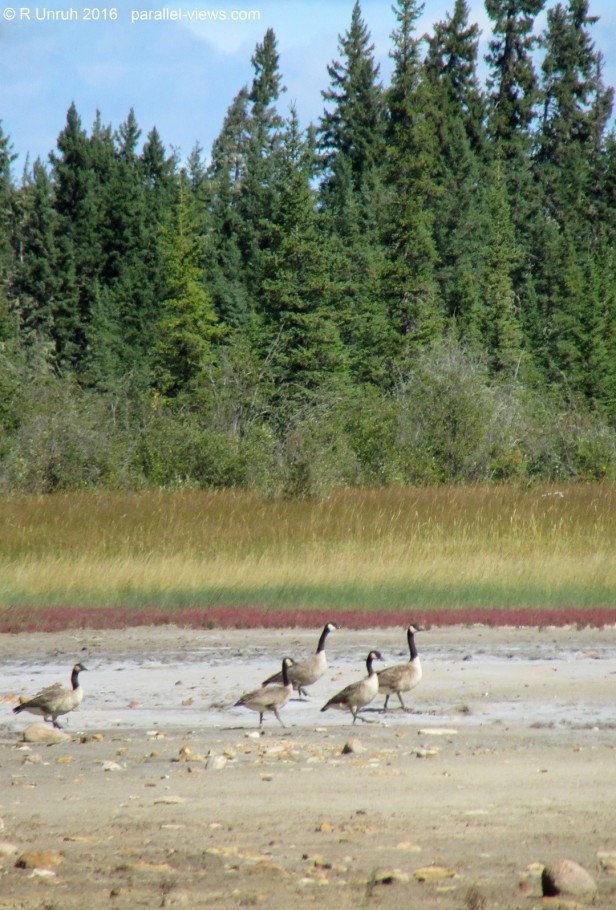 Back at the lookout, I took several photos of the salt plains with my full spectrum camera. From the lookout, the visible spectrum photo looks like this:

Here is the photo broken down into the blue, green, and red channels. The usual patterns are still there; the sky is lighter and the vegetation is darker the shorter the wavelength is. However, I’ve never looked at red samphire in my other posts, and an interesting effect can be seen with the red samphire as compared to the less salt-tolerant plants next to it. Remember, for colour channels, the lighter the shade in each channel means the more of that colour the object exhibits.

As could be expected, the red samphire is exhibiting a little less response in the blue channel than the other vegetation. The difference is subtle- both types of plant are fairly dark, as most plants absorb a lot of blue(and violet and ultraviolet) light. The evergreen trees are darkest, and absorbing the most blue light.

Also expected, the ‘green’ plants reflect a lot more light than the red samphire. It seems fairly obvious that green plants are greener than red plants, so it’s nice to have that reaffirmed. I’d say that in the green channel, the difference between the two vegetation types is the most noticeable. The evergreen trees are brighter than in the blue channel, but still much darker than the ‘green vegetation’. They’re almost the same shade as the red samphire.

… and that’s not what I expected. It’s actually the opposite of my expectations.  In the red channel, the red samphire is slightly darker than the green vegetation surrounding it. In essence, the green plants are reflecting more light that the red plants.

What I presume is happening is that the green vegetation might be reflecting more red light than the red samphire, but it also reflects more green and blue light as well. As the human eye(and modern cameras) combine the different wavelengths into one colour. With the green plants, the added red and blue make the plant appear a yellowish green. As the red samphire has little green light or blue light reflected, the only colour that reaches the viewer is the red, and that is how it appears. The evergreen trees, on the other hand, are darker in every channel. They’re as dark as the red samphire in the green channel, but are darker than it in the blue and red channels.  As there isn’t much response in any channel, the trees appear to be a very dark shade of green.

On to the infrared- using my Zomei 680 nm filter. Clouds were moving in, and are casting shade on parts of the salt plains.

It’s very subtle, but the red samphire seems to be slightly brighter in the infrared range. I didn’t have any longer wavelength infrared filters with me at the time, but I’d be interested if the red samphire reflects more infrared light at 760 or 850 nanometres.

As you can see, the clouds were quickly coming in, and are present in the rest of the photos. With no filters on my camera, the full spectrum photo looks like this. 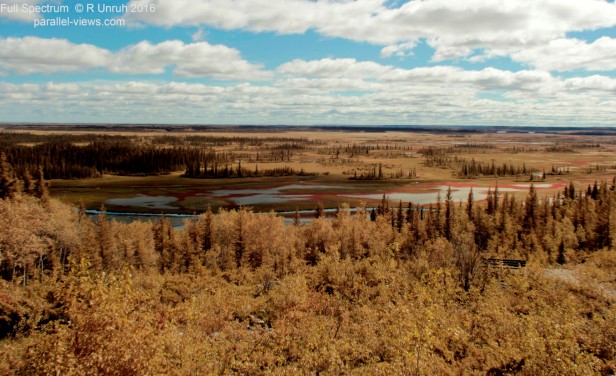 The infrared light makes most of the other plants appear yellowish, as if it were autimn, but the red samphire is still red. Where there is no cloud(on the far right), the red samphire looks like it might actually be brighter than the surrounding plants. I don’t usually do this, but as there is no deeper infrared photo, I extracted the red channel of my full spectrum photo to look at in more detail. This would be a combined red/infrared photo. 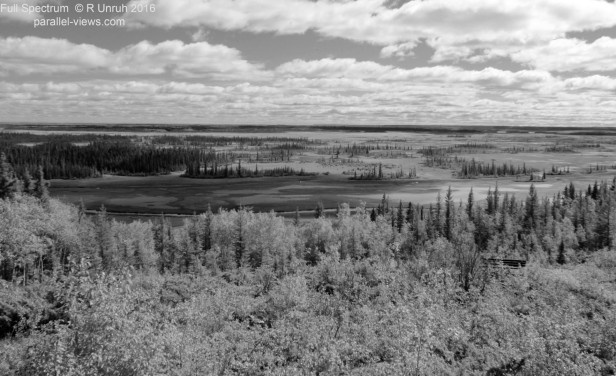 In the shade, the red samphire is slightly darker than the other plants, but in the sunlight, it is the same shade. If I removed the red light, I suspect that the samphire would be lighter in infrared than the other vegetation.

And finally, a dual infrared/ultraviolet photo, using my Schott UG11 filter.  The red samphire is much lighter than the surrounding vegetation again. judging by the 680 nm, full spectrum, and dual band photos, it does seem like red samphire is able to reflect infrared light better than the other plants, but without going back and taking photos deeper in the infrared wavelength, I can’t be sure.

Ah well, a project for a future date.

The preceding photos were taken with a modified Canon Rebel T3i camera.

2 thoughts on “The Salt Plains of Wood Buffalo Park”