Yes, I know my title is grammatically incorrect, but it sounds better to me than “The Astounding Epic of the time I was bitten by a horsefly”. Anyways…

This last summer, I was walking my dog down by the river. I noticed a horsefly buzzing around her, and tried to shoo it away. Before I could even see it land, the horsefly bit my arm and flew off. It was sore for the rest of the day, and I could still feel the bite the next day. Two days later, and I was back to normal.

…Literary purists may argue my story doesn’t quite meet the definition of an ‘Epic’. My counterpoint: it REALLY hurt.

Horsefly bites are painful due to the way they bite the skin; they cut into the skin, rather than puncture it. There can be a reaction to the horsefly saliva introduced in the bite, but most people won’t be affected by it.

After a painful insect bite, some people might wonder why it hurt so much, and how to stop it hurting. Other people might consider how to get revenge on the horsefly(or, if it already flew away, how to make the rest of the species extinct). Personally, my mind was occupied with the thought “I hope I can take some pictures of the bite before the swelling settles down”

An hour after I was bitten, I returned home and grabbed my cameras. Here was my arm an hour after the bite.

It looks fairly normal. If you look close, you might see a bit of red swelling…

… and if you look even closer, you might see the bite mark(inside the black circle).

Looking at it in the photo, it doesn’t look that bad- it sounds like I’m whining about nothing. It felt warm though, so I figured I’d switch to my thermal camera. I started off by using the monochromatic ‘White’ filter, one of the filters given in the camera options. For this filter, the lighter the shade, the warmer the temperature. 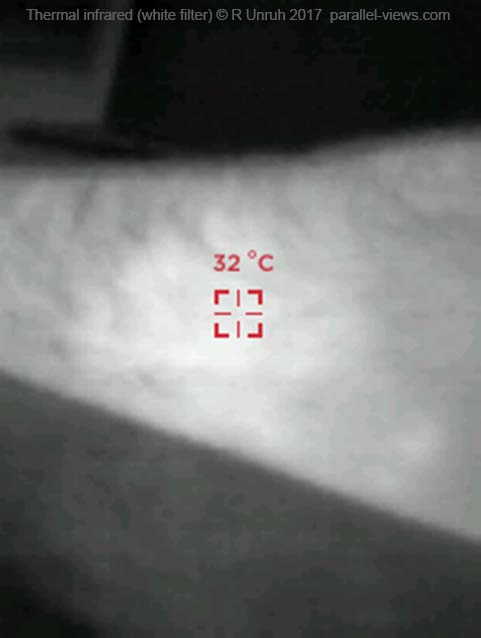 The bite is definitely more noticeable in the thermal spectrum- the inflammation has warmed the region around the bite.  For reference, the normal skin outside the inflamed area was 27° C.

The inflammation was still subtle in this picture, though, so I switched to colour filters. First, I used the ‘Cool’ filter. Orange/Yellow are warm, blue/black is cold.

Much more noticeable. Next, I used the ‘Tyrian’ Filter. violet/black is cool,  orange/white is warm.

Now it actually looks as painful as it felt.

Finally, I used the ‘Black’ filter. This is basically an inversion of the ‘White’ filter; the darker the shade, the warmer the object.

… and that is clearly a zombie bite. No wonder why it hurt so much.

Seriously, it seems like thermal imaging could be useful in medicine for examining inflammation and injuries, and when browsing online, I saw several webpages talking about its use in sports injuries and veterinary medicine. If my entry level thermal camera can see the inflammation so clearly, I’d love to see what an advanced camera can do.

I don’t plan on getting bitten or injured in the future, but I’ll definitely have to test out the thermal infrared image again if I do.

I used a Seek Reveal for the thermal pictures, and a Canon SX600 HS for the visible spectrum photos.