Red/Cyan 3D glasses are needed to view the photos.

After the news yesterday about the damage to the Taj Mahal, caused by a storm, I decided to finally upload my 3D photos of the Taj Mahal.  Thankfully, the damage wasn’t to the main marble structure, but rather two of the entrance gates. The main damage was to the Royal Gate(Darwaza-i-rauza), the main entrance for visitors.  The small minaret on the right side above the entryway collapsed, as did a minaret on the south gate(I don’t have any photos of that gate, though).  I don’t feel comfortable using other people’s photos on my site, so check the links if you’re interested. Thankfully, the damage isn’t closing the monument, and is already being repaired.

The Royal Gate is directly aligned with the mausoleum of the Taj Mahal-  as soon as you pass through, you are confronted with a perfectly symmetrical view:

Following the pool leads north to a central platform made of marble. An identical pool is on the far side of the platform(except the fountains were active in this one):

As well, symmetrical pools(drained when I was there) also stretch west and east from the centre as well, making a cross shape. West of the central platform is the museum(I didn’t have time to visit it on my tour).

I kept walking beside the main fountains to the base of the Taj Mahal mausoleum , then followed the path left(west) to the steps to enter the structure. Before I went up, I took a few photos:

To protect the marble, visitors have to wear disposable coverings over their shoes(at least I didn’t have to walk barefoot, as I did at a few other sites). The marble is smooth, and shone brightly in the morning sun. 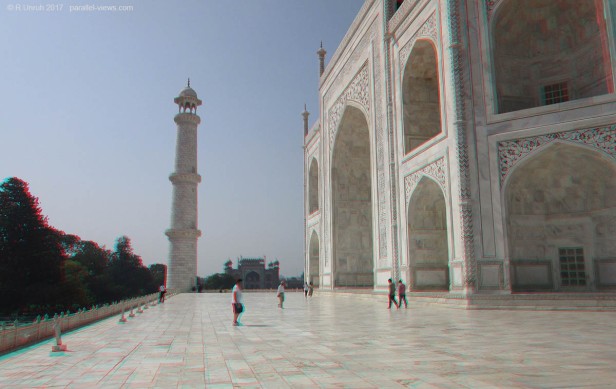 No photos were allowed inside the structure, so all of my photos are from the outside. It’s understandable, but a pity- I had been hoping to do another ‘Then and Now post’ comparing my photos to this 1903 Underwood & Underwood stereoscope. 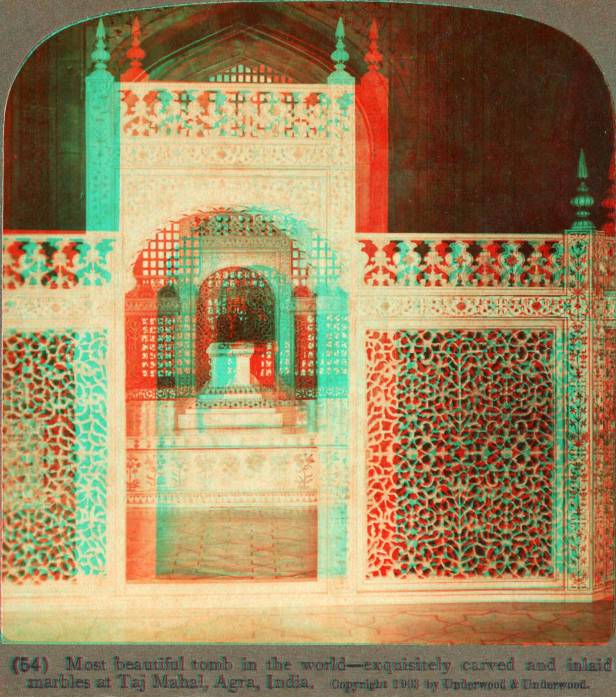 In case you’re wondering, The centre of the tomb looks the same. The photo is discoloured from age, ,  but the majority of the photo is of white marble, including the elaborate carved walls. The floral patterns visible in the photo were created from inlaid gems and semiprecious stones.

Back outside, I took another photo looking west at the mosque(an identical building is on the east side,that one was originally a guesthouse). 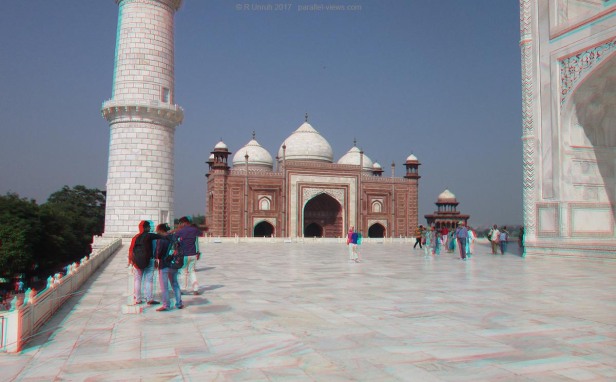 I already posted this photo; as it is my favourite 3D photo from my trip, here it is again. This photo was taken from nearby Agra Fort in early evening the day before- the fort has a perfect view of the Taj Mahal. 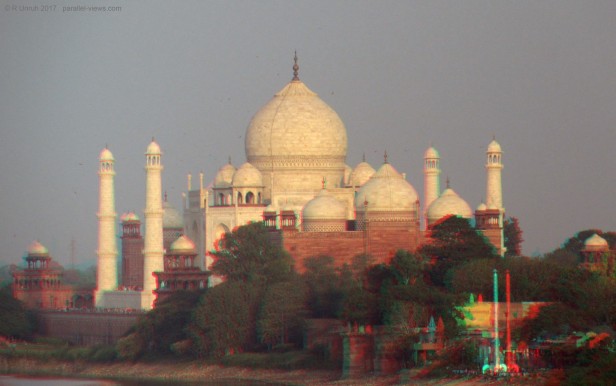 Here is the opposite photo; Agra Fort from the Taj Mahal.

It isn’t as good- I didn’t have the space to exaggerate the 3d effect, and was more interested in photographing the Taj itself than I was in finding a spot where I could take the photos farther apart. The photos of the Taj Mahal from Agra Fort were taken about 10m apart; these were taken only 10 cm apart. The fort isn’t as dramatic as the Taj Mahal, either- Agra Fort is the red buildings in the distance,  above the river on the right side of the photo. It was interesting to visit the fort, and I’d love to explore it further, but it is not as exciting to photograph it from a distance. The Taj Mahal was designed to stand out; the forth, not as much. 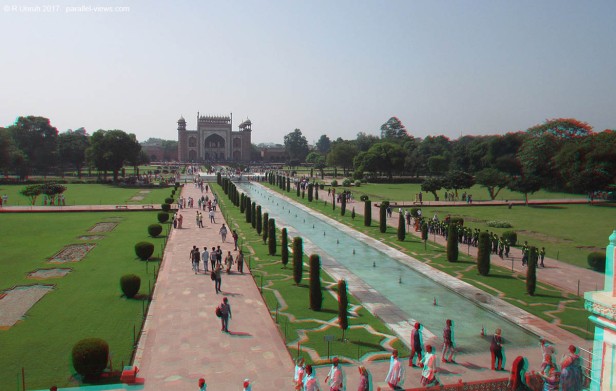 And those are my best 3D photos of the site. My 2D multi-spectral photos were posted here, and you might be able to guess what my next post will be.

It seems like I had the best time to view the Taj Mahal; in addition to repairing the storm damage, much of the site is being restored, and may be covered by scaffolding this year. When it is done, the Taj should be even brighter white… I might have to see it again in a few years.

The above photos were taken with dual Canon SX600 HS cameras.

One thought on “3D- The Taj Mahal”