Now that the holidays are over, I figured I’d start off the new year posting something big. As promised, my photos of the Taj Mahal.

Commissioned in 1632 by the Mughal Emperor Shah Jahan, the Taj Mahal was a mausoleum to his wife,  Mumtaz Mahal. It took 20 years to complete, and houses the bodies of both of them. Tha Taj Mahal is one of the best examples of Mughal Architecture, and is a UNESCO World Heritage Site. The mausoleum itself is the large marble building; two other buildings made of red sandstone bracket it. Perfectly symmetrical, one of the sandstone buildings is a mosque, and the other is a guesthouse. The peak of the dome is 73 metres high, and the four surrounding minarets are 43 metres high.

I took a lot of photos…seriously, a LOT. I covered quite a bit of the spectral range, but not all in one location; I’ll include a visible spectrum photo to match the other spectra at different angles.

First though, a photo from a direct head-on angle, directly past the great gate(Darwaza-I Rauza). The gate itself was undergoing restoration at the time, and covered with scaffolding. I had been disappointed, because the mausoleum itself was scheduled for restoration at the same time.  On my first view of it past the gate, I saw…. 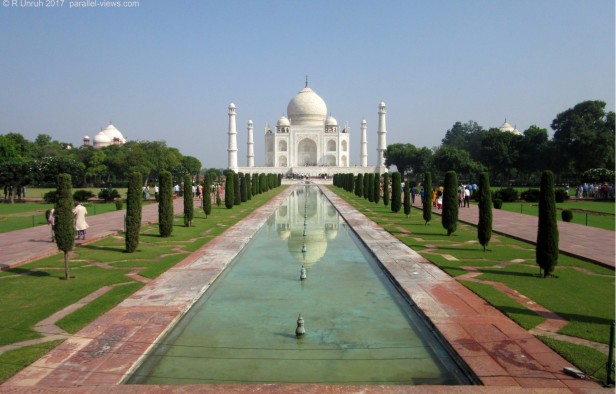 … that I didn’t have to be worried. I think I could revisit the site a hundred times, and not get a better photo.

I’d say that there are five major elements in the photo that are responsible for most of the colour.  First, there is the green of the vegetation in the gardens, and the clear blue sky. The sky was perfectly clear, but there is some haze on the horizon that is  visible in the photo. It doesn’t detract from the  photo in the visible spectrum, but might affect the shorter wavelengths. I’ve covered how both of these can change outside the visible spectrum in other posts, so won’t dwell on them too much here.

Third, there is the white marble of the mausoleum(and the top of the structures to the left and right of it). There is a raised rectangular viewing area and fountain in the centre of the garden- it is of white marble too. The fountains were not running, and the raised platform isn’t clearly visible(it blends in with the mausoleum itself in the photo).

The other stone used, as mentioned, is red sandstone, which is on the walkways, the sides of the pool, and in the garden in geometric designs. It is also on the structures to either side of the mausoleum, but as they are mostly obscured by trees, the sandstone isn’t visible.

Finally, the pools of water were perfectly still, reflecting the monument. There is a faint green-bluish colour to the base of the pools and the inactive fountains in the foreground. I suspect it is copper or bronze, but am not sure.

Here is the above photo, broken into the red, green, and blue channels. 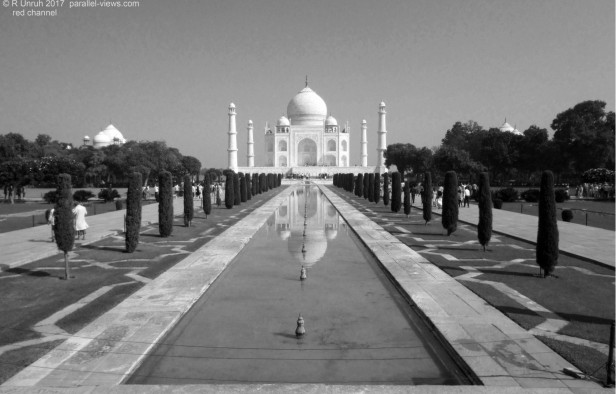 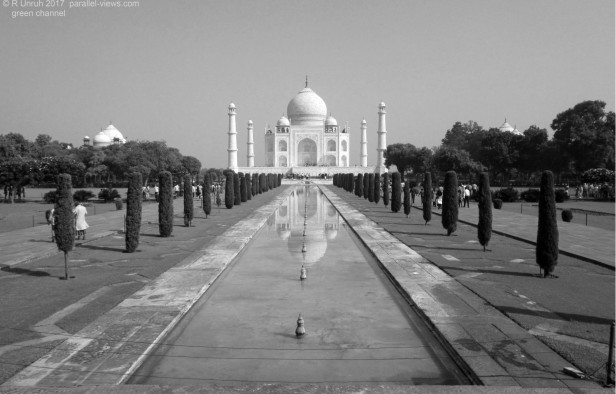 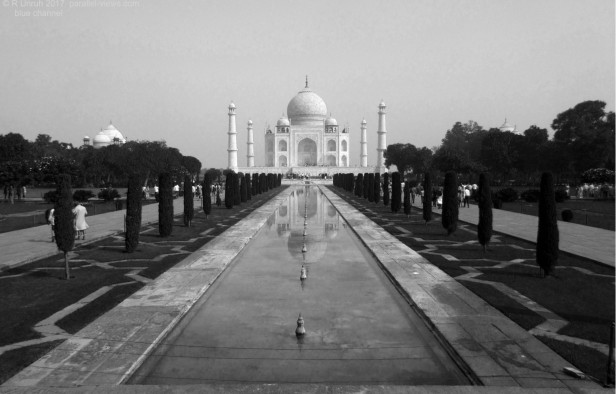 There’s not much unexpected here- the sandstone is lightest in the red channel, but seems to have the most detail in the green channel. The Taj Mahal is bright white in all three channels- I didn’t expect anything different. As always, I was using a white piece of paper to set the white balance. 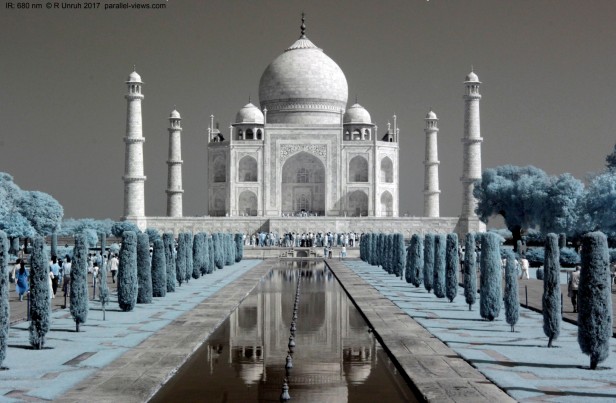 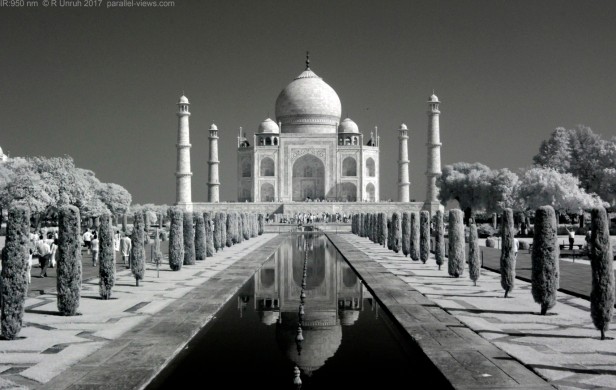 And at 950 nm( using my Zomei filter again), the sandstone is even darker. The water is reflecting the black sky, but the horizon is still lighter than usual(I suspect that haze was caused by the large amount of burning in the area- unlike regular atmospheric haze in my region, smoke still is detected in the near-infrared range). 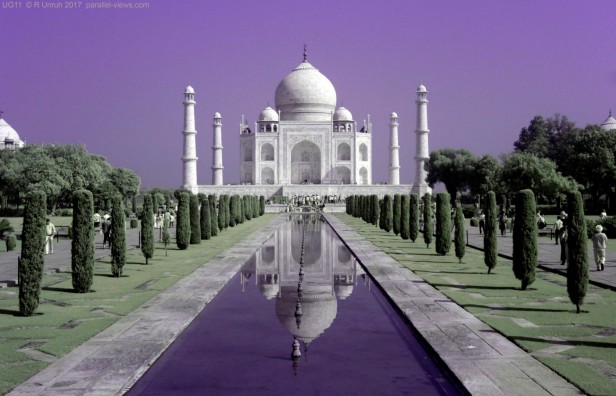 With my UG11 filter (combining near infrared with ultraviolet light), the sky and water have a pale purplish hue. The sandstone is still darker than the marble.

As previously mentioned, my homemade short pass filter(which allows ultraviolet, violet, and a small amount of blue light through) is not able to find a neutral white balance.  Without the white balance set, it looks like this… 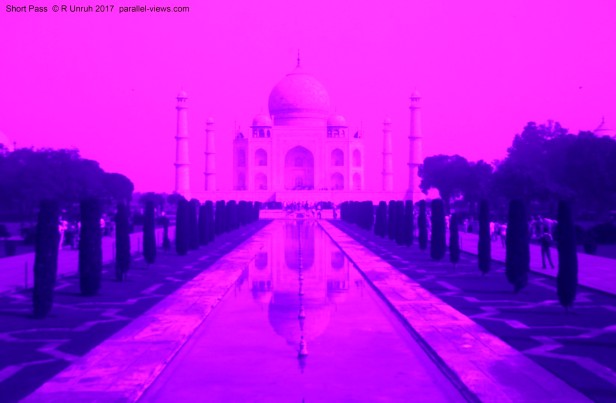 …which I kind of like, as an abstract photo. It is definitely a unique view of the Taj Mahal. With the white balance set, this is the result: 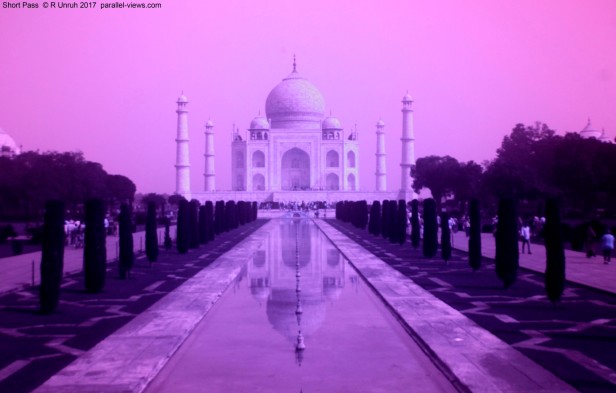 Which is still excessively violet. Unfortunately, I’ve never been able to set a neutral white with this filter…

…except, I kind of did. When I tried using Adobe Photoshop’s ‘Auto Color’ tool, it recoloured the above picture to something approaching a neutral white balance: 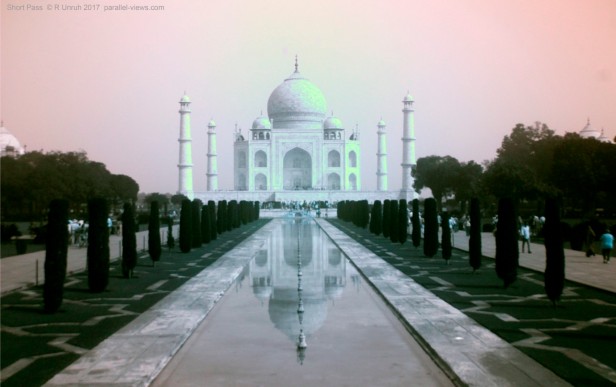 There are a lot of similarities to a full UV photo- the sky is extremely light, and the foliage is extremely dark, almost black. Unlike a UV photo, there is still a lot of colour in the picture. There is a pinkish hue through most of the photo, contrasting with the dark green of the trees. Some people seem to be wearing blue, but that is more an effect of the colour change. The Taj Mahal is still the brightest object in the photo, or at least the side facing the sun is. The sandstone looks like it has a similar hue to the marble; the marble is still lighter, but not by much. I don’t know why this photo had a white balance that Photoshop could work with- no other short pass photo could be converted the same way(and I tried with dozens of them). Perhaps the marble?

The above photos were taken at perhaps the best location for picture-taking; I only had a couple minutes to take them before being shooed along. For my thermal infrared photos, I took several a few metres to the right. Here is the location in the visible spectrum(I’m not going to bother splitting the channels again): 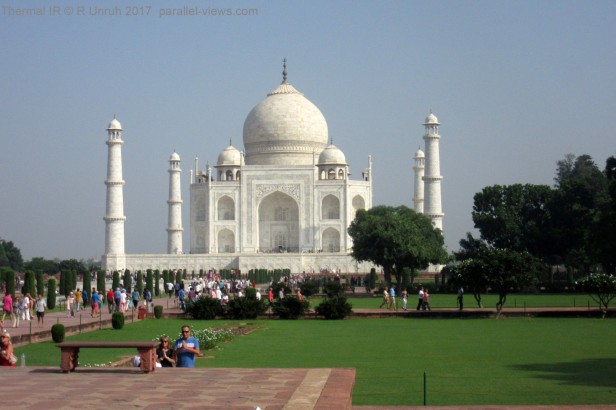 And I took the following thermal infrared photos with my low resolution Seek Reveal Camera. 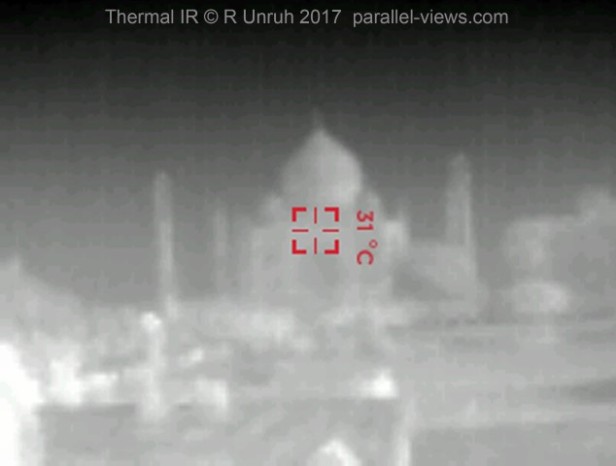 Using the White Filter setting(this is a digital filter in the camera’s settings, not a physical one), you get a good overview of the platform in the foreground, as well as the Taj Mahal itself. White is hotter, black is cooler. Yes, it was above 31° C by 9:00 AM.

There isn’t as much contrast here; people moving in the foreground are warmer, and appear white. Everything else is shades of grey.

The Glory filter(red=warm, blue=cool) has a better contrast. Most objects are red; there are a few cool spots, like in the shade of the trees or on some clothing. Most noticeably, the dome appears to be slightly deformed. The shady side of the dome is much cooler than the rest of the Taj Mahal or the garden, blending in with the sky. 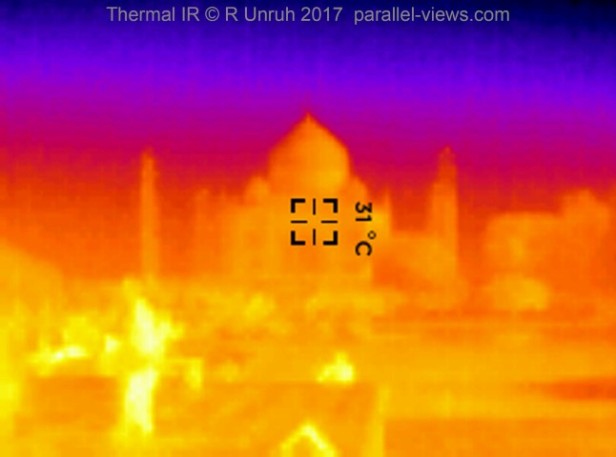 With the Iron filter(yellow=hot, blue=cool), the transition between the temperatures looks smoother than with the Glory Filter. People are still the warmest objects, but I think that by afternoon, as the stone heated up, that would have changed.

The Seek Reveal isn’t capable of zooming in or out, and digitally zooming isn’t an option when the picture resolution is only 206 x 156 pixels. I wanted a closer thermal photo of the mausoleum, so I took the following photos beside the central fountain and platform.

I didn’t take a visible spectrum photo here, but here is the spot in 680 nm infrared: 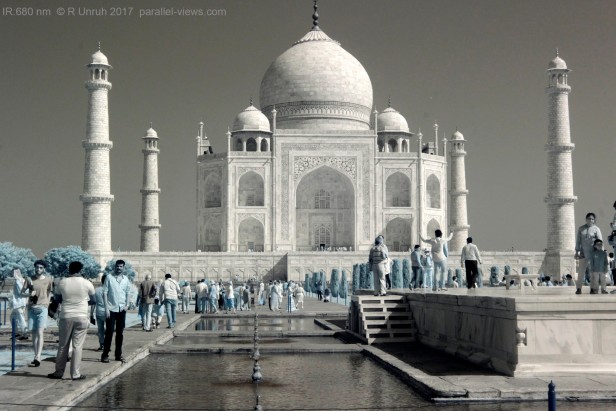 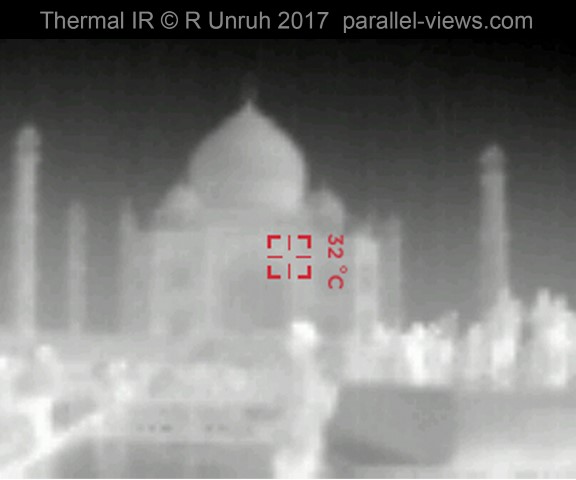 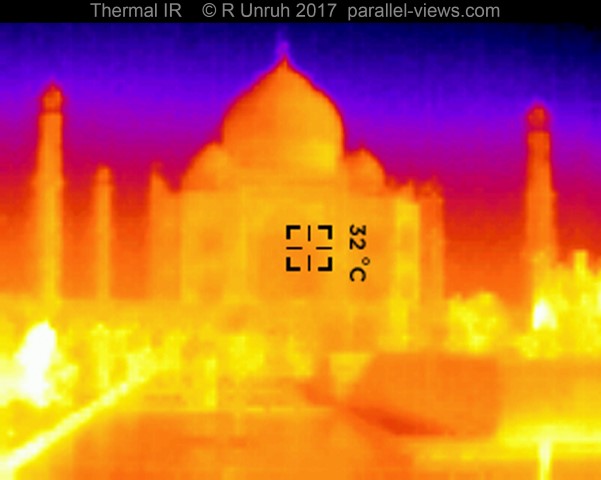 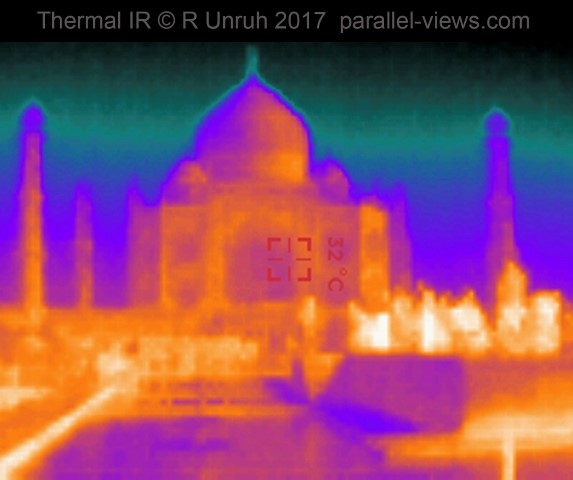 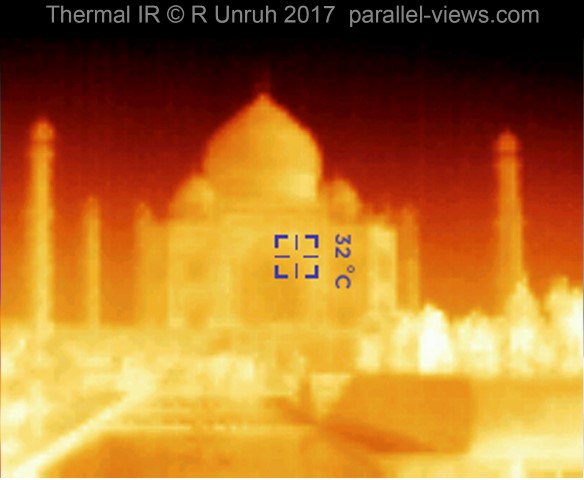 In these thermal photos, the water is slightly cooler than the surrounding stone or grass. I personally prefer the cool and glow filters aesthetically, but they all look good, given the resolution, and the thermal data matches for each of them(excluding the wandering people).

Finally, back at the gate again, I found a quiet spot to prop up the camera. From this angle, the Taj Mahal looked like this to the naked eye… 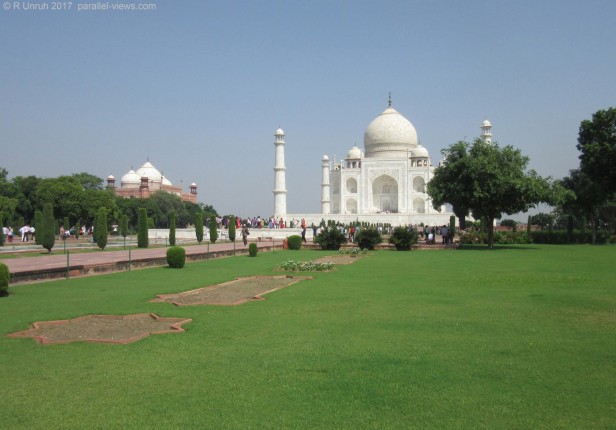 And this with my UG11 dual band filter: 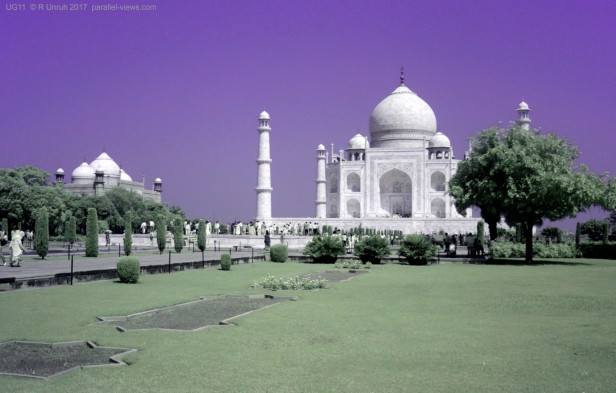 There was no one walking in the foreground, and I had time for a long exposure, so I combined the UG11 filter with my BG40 filter for a true ultraviolet photo(with maybe a small amount of infrared leakage). I took two pictures, with differing exposures. 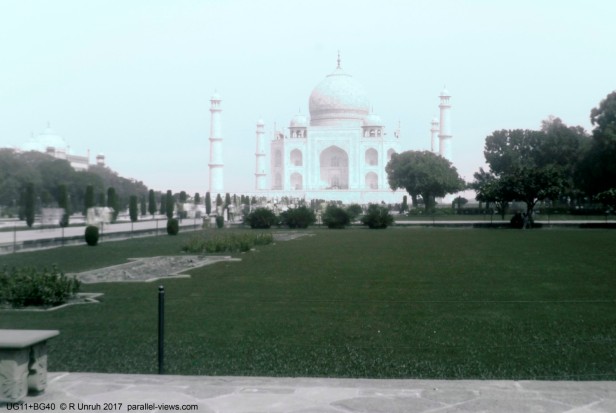 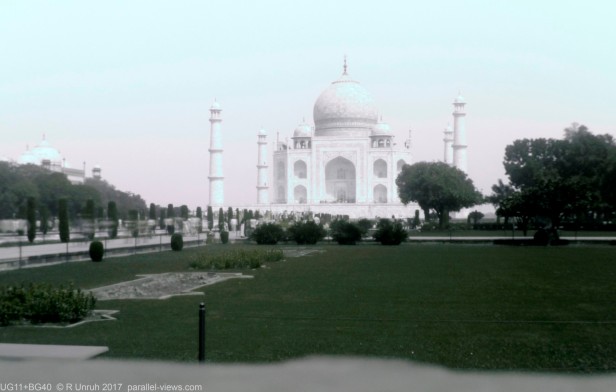 …and I like them? I mean, I like my other photos better, but these aren’t bad. My usual complaints about UV photography (dark foliage, extremely bright sky, significant haze) still stand, but the monument makes it work. The marble is still extremely bright at these wavelengths, and The Taj Mahal seems to blend in with the sky. It has a surreal quality, like the Taj is actually a part of the sky. And there’s a real miracle- a good UV photo! The exposures were 6-8 seconds long- you can see the motion blur of people walking to the left.

The few bits of red sandstone visible look very similar to the marble, but it is hard to tell for sure. It might be that the sandstone reflects a lot of UV light, though(I’ll have to try more UV photos next time I’m looking at red sandstone).

I did take other pictures at the Taj Mahal that I will probably post another time( and I still have 3D photos to post), but that’s probably enough for now. As far as I can tell, it’s almost impossible to get a bad photo of the Taj Mahal- it is impressive in every wavelength!

4 thoughts on “The Taj Mahal”