Autumn is here; now is the perfect time to take a walk in the forest and enjoy the red trees and fall colours.

Except it isn’t- most of our leaves had fallen by the end of the first week in October; we had about two weeks of good colours in September, but the trees are bare now. That statement is wrong in another way, too: Northern BC doesn’t get too many red leaves in autumn. There are a few plants here and there, but most of our leaves only turn yellow.

The best spot to spot red trees is in the more cultivated regions of the city: gardens, beside the streets, and in front of stores.

If I take the photo above and break it into the three colour channels, blue looks as expected… 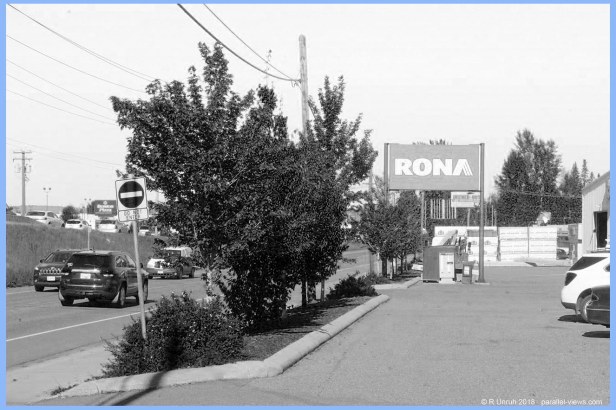 The trees are still dark; the leaves still seem to be absorbing light in the shorter wavelengths.

In the red channel… 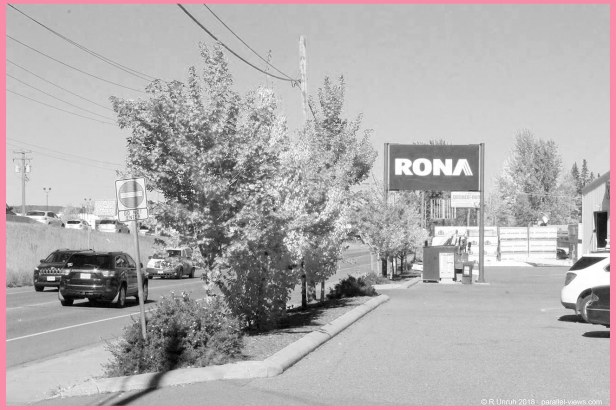 .. all the trees and plants look fairly similar as well. Too similar…

There are red trees and yellow trees. How come the red channel foliage looks so similar across the different species and colours? If I look closely, the trees are slightly different shades in this channel, but nothing like the way they look in the visible spectrum.

This is the only channel in which the different foliage colours are easy to distinguish. I’m going to have to take photos from this location in summer, but the photos point to something counter-intuitive. Here’s my theory:

The trees aren’t getting more red or yellow. They’re getting less green.

The red pigments were already in the leaves; however, during the growing season the green pigments were enough to drown out the red. Now that the chlorophyll is shutting down, the tree is absorbing more green light.

This is borne out by photos outside the visible range. They all look as expected, and there is little variation between colours of the foliage. The leaves still absorb a lot of ultraviolet light, as seen in the UV(stacked Schott BG40 + Schott UG11+Short Pass filters) spectrum…

… and with the short pass filter(UV+ Violet + some blue light). 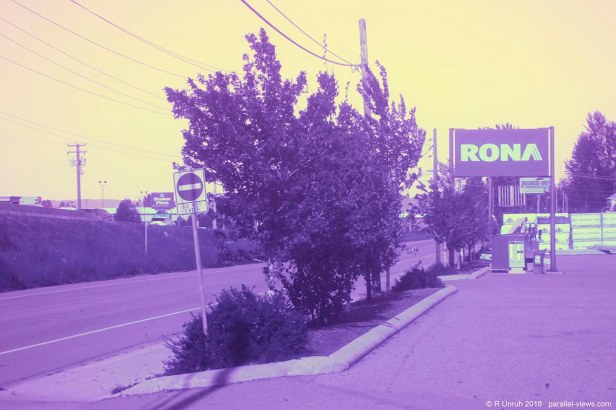 On the longer wavelengths, the trees look the same colour- the biggest difference is between them and the bush in front(It seems to be a vareity of Juniper). The Rona sign is unusally bright with my Zomei 680 nm filter; I have no idea what compounds go into that plastic. 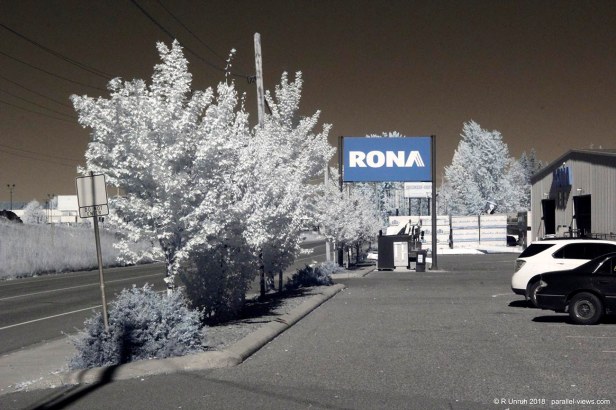 And at 950 nm(another Zomei filter), the trees still look similar…

.. just like with the Schott UG11 dual band filter(UV+IR light)

Finally, a full spectrum photo. It looks similar to the visible spectrum photo, but the red is a lighter, more vibrant colour. This is just from the infrared light altering the red channel.

So, the reason the colours change does seem to be focused on the green spectrum. Of course, to double check that the main difference is in the green channel, I went to a different location.

Some main differences here: The grass is still green and growing, and there are coniferous shrubs on the left side. Coniferous and deciduous plants appear differently in different spectra, in my opinion; coniferous ones are usually darker. As such, the main point of comparison should be between the red maple trees and the grass. Here are the three visible colour channels:

There is some small difference in shades in the red channel. Again, though, the green channel shows the sharpest divisions. The grass shows a sharp division between healthy an hibernating in the blue channel, but not the tree. In general, the grass and trees show a similar amount of red pigments, but the grass has much more green than the trees.

Outside the visible spectrum, the same trends as above continue- the foliage shows little variation.

No ultraviolet this time- the wind was strong enough that my tripod was shaking. The above photos were okay, but when taking a 3 second exposure, everything looked blurry.

There’s one more experiment to try, one I alluded to earlier. How do the colours vary between a growing plant and the one at the end of its growing season. There’s my plan for next year: compare the colours across time.

… or I could just look it up, but it’s much more fun to figure it out myself.

The above photos were taken with a modified Canon Rebel T3i camera.

One thought on “Fall colours and false colours”