Red/Cyan 3d glasses are needed to view the following photos

I’m running a little behind this week, so just a short post.

And then there’s Shanghai. Altogether, I’ve spent about eight hours in the airport, and had a window seat when I flew in and out of it. Although I believe this experience makes me an expert in Chinese history and culture, I am widely considered in my hometown to be a self-absorbed idiot.

So, Shanghai. 24 million people, almost 2/3 of Canada’s population, live in the city. It’s China’s largest city; The capital city of Beijing has only 22 million people. There are two major airports in the city- I went to Pudong Airport both times. It has a Starbucks, which seems exactly like every other Starbucks except the prices are in yuan. In the airpoert, you can also buy drinks from places that AREN’T a Starbucks, because this is a strange and foreign culture.

…and now  that I’ve exhausted my store of mystic Oriental secrets. Lets talk about my pictures.

I love flying- it offers a great chance to take 3D photos. I don’t even need a 3D camera- the plane is flying fast enough that I can quickly snap two pictures, and just use them the same way I’d use a left and a right 3D photo. This is especially great for landscape photos. The farther apart the two photos are taken, the more exaggerated the 3D effect. This isn’t necessarily a good thing- if the photos are too far apart, the 3d won’t work, and the photo will just be a headache-inducing mess. In the case of a city seen from an airplane, however, the effect can be rewarding- the exaggerated 3d give the city a depth that cannot be seen with the naked eye. The photos look like they were taken from a miniature model of the city.

It was a hazy and rainy day(judging from the droplets on the airport window, because I didn’t leave the airport except by plane). I probably should have swapped to an infrared-pass filter, but I wanted a true colour photo of the city. If I get a chance to visit again, I’m definitely going to take photos outside the visible spectrum(especially if the haze is a regular thing); in fact, if I visit again, I might even leave the airport!

I took a closer photo of the buildings in the centre of the city. Some of Shanghai’s most famous modern buildings are visible. 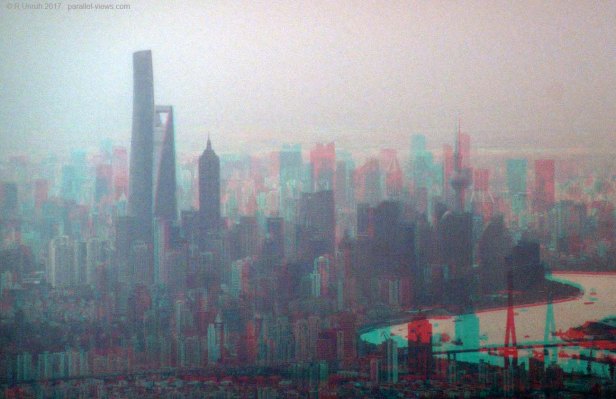 The largest building in the photo is the Shanghai Tower, 632 metres tall. It is the tallest building in China, and the second tallest in the world.In front of it is the 492 metre tall Shanghai World Financial Center(the building with the hole in the top). This was the former(2007-2013) tallest building in China. To the right, near the river, is a tower with a spherical structure in the middle. This is the 468 metre tall Oriental Pearl Tower, the former former tallest structure in China(1994-2007). Just slightly to the right of the Shanghai tower and the Shanghai World Financial center is the Jin Mao Tower. At 421 metres tall, it is the former tallest…

You know what? It isn’t important. Moving on…

Flying into Shanghai, the plane passed over a canal- it illustrated just how flat the lowlands were:

And of course, there isn’t much point to a Canal without a body of water at the end. Shanghai has the worlds busiest container port, and it shows. 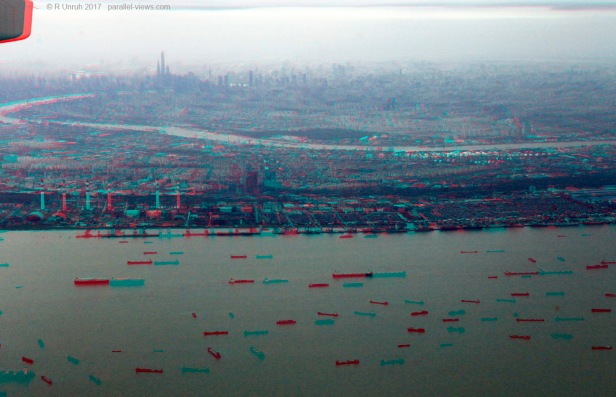 And unless you want 3D photos of an airport, that’s about all my photos from China. Someday, I’m sure I’ll actually explore the country; until then, I’ll always have my memories of that Starbucks.

the above photos were taken with a Canon Rebel T3i camera.

One thought on “Shanghai from the Sky”