Well, I took a break writing this blog for the holidays, but I’m back, with my batteries charged up. Well, my mental batteries, but also my camera batteries.  No vacations planned for a while, so I’m posting photos from my last vacation, in August 2018.

Mosquito Lake is on Haida Gwaii(AKA the Queen Charlotte Islands). The islands can be divided into two main sections. Graham Island, the northernmost large island, is where most of the population of Haida Gwaii resides. Moresby island, south of Graham island, only has one community of any size, and it lies on the northern shore. To explore farther south, a good vehicle is needed, as the roads are mostly gravel forest service roads(and even they don’t cover much of the island- a boat is what is really needed to experience it). Towards the southern terminus of the roads lies Mosquito Lake. it is a large freshwater lake. 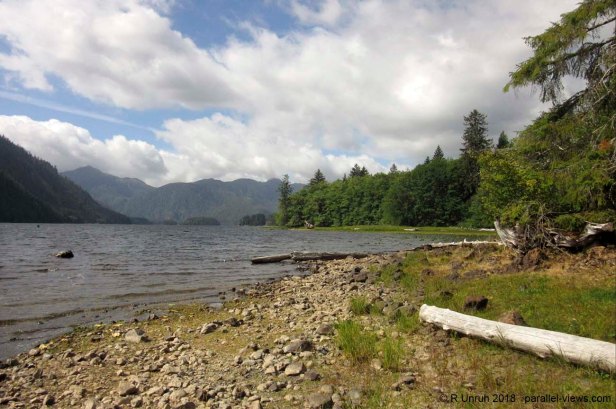 Now, given the name ‘Mosquito Lake’, some people might, for some reason, feel uncomfortable visiting it. And yes, the lake has a little bit of an insect problem… the horseflies were everywhere. No mosquitoes for my visit, as it had been a dry summer.

The lake isn’t actually named after the insect anyways. During the second world war, the area was logged extensively. The wood from the Sitka Spruce trees was used in the production of the Mosquito Bomber. Are there mosquitoes? Probably. When I visited the island a few years ago, during a wetter year, they were everywhere.

For my visit in August, Haida Gwaii was clear of the smoke covering most of BC. The photo I took of Mount Moresby, on the south side of the lake, looks hazy, but that mostly seemed to be a result of the position of the sun above the mountain and of the mist in the air(and, possibly, haze in the higher atmosphere). Overall, the day seemed clear, even from a distance. 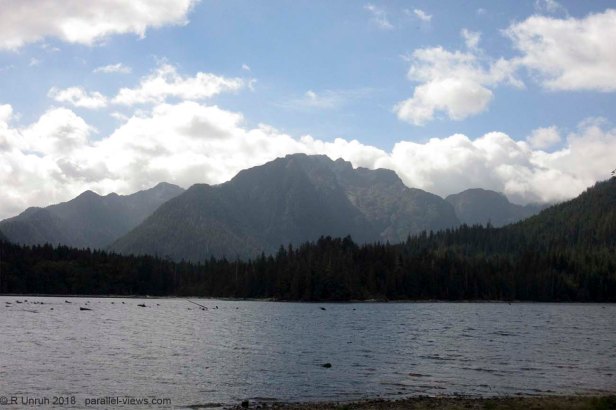 To dissect this photo in a bit more detail, I’m breaking it into individual channels again. The photo looks similar in both the red and green channels… 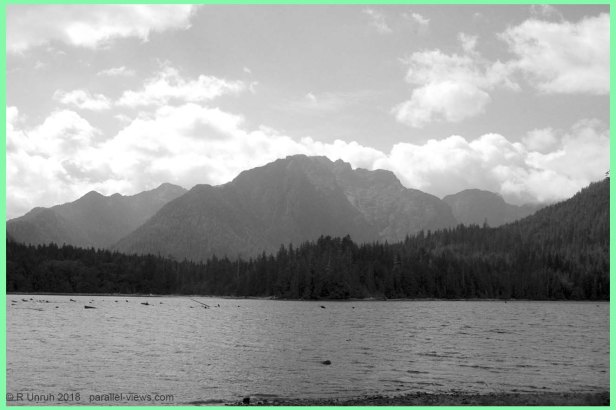 … but a lot more faded in the blue channel. 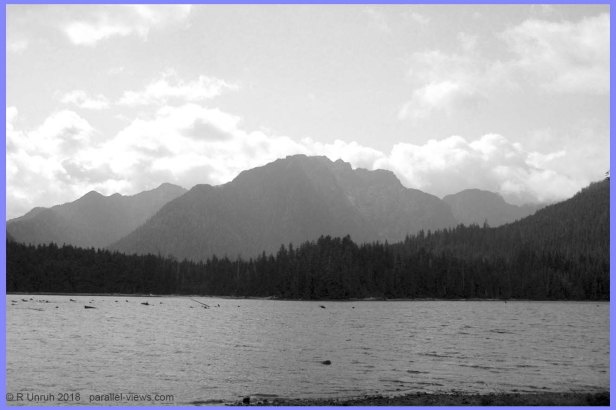 Honestly, from my experience, that’s pretty normal. Blue has the darkest foliage, and shows the greatest effect of atmospheric haze (and Rayleigh scattering). Of course, that isn’t unique to the blue channel, just it is most apparent there(at least as far as the visible wavelenghts go, but I’ll get into that soon). There is some increased haze in the green channel as compared to the red; it is more noticeable if I compare the channels in GIF form.

With the light scattering, it is still hard to make out any detail of the mountain in the visible spectrum, even at the longer wavelengths. To see it better, the best choice is to go into the near-infrared range.

Using a Zomei 760 nm filter, the crevices and contours of the mountain can be seen clearly.  The bluish colour of the trees helps to separate them from the bare rock, even as far distant as the mountain peak.

With a Zomei 950 nm lens filter, the mountain appears slightly clearer, but the contrast of the rock to the foliage isn’t as obvious, especially with the shadows of the clouds and rocks altering the different shades. The trees are slightly brighter than the rock, but not by much.

With a Schott UG11 filter(ultraviolet and infrared light), the mountain is still clearer than the visible spectrum photo, but much more faded than in the near-infrared range.

I normally don’t like to touch up my photos too much- I adjust the contrast slightly, and may remove some dirt on the lens(there is one spot on the sensor that refuses to be clean), but when examining photos taken outside the visible wavelength, I usually leave the colour as-is. However, playing around with Photoshop’s ‘auto-colour’ feature,  the UG11 photo was adjusted to look like this:

I like it. The colours are almost close enough that they could be mistaken for a visible wavelength photo, but not quite. The trees are just a little too green, and the sky a little to indigo. It’s not as accurate a representation of what the camera sensors recorded, but it’s all false colour anyways, and sometimes adjusting the photos makes them look much better.

…Other times, it’s a lost cause. Nothing will make this picture look better. This picture was taken in full Ultraviolet, by combinging the Schott BG40 and UG11 lenses. Maybe a bit of infrared light leaks in, but not enough to make it look good.

I’d thought the blue channel didn’t have much detail of the distant mountain, but it was much better than the ultraviolet photo.

I didnt take any thermal photos of Mount Moresby. Instead, lets get back to this photo:

This picture of Mosquito Lake is taken looking to the west. The sun is a t a different angle, so isn’t affecting this photo as much, as evidenced by the red, green, and blue channels. 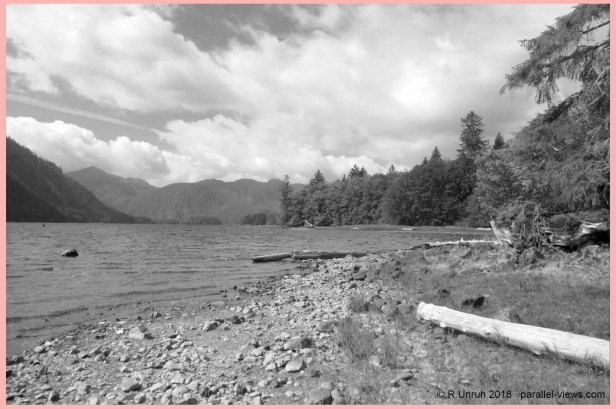 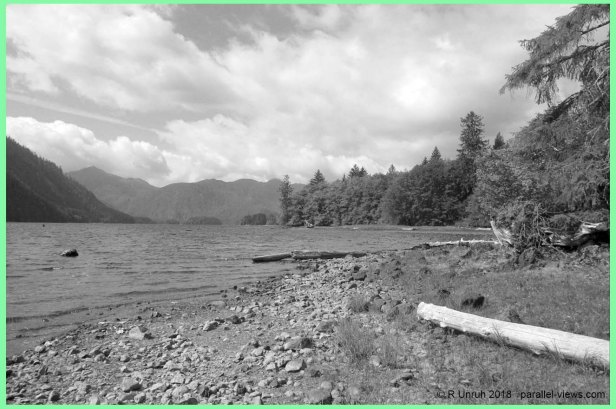 The same trends at the Mount Moresby apply to this photo as well, but at least the trees on the distant hills are distinguishable even in the blue channel.

Again, not in the ultraviolet photo. Here it is, UV again.  I’m just getting this one out of the way so I can look at prettier photos. 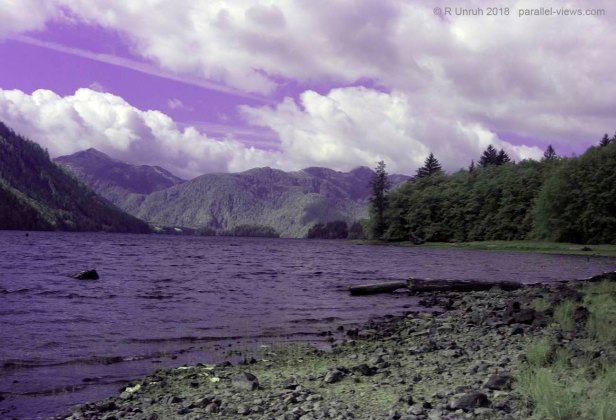 Everything is clear in the dual band photo, and much less hazy than Mount Moresby. Colour correction didn’t do anything ‘pretty’ to this picture, but it looks good as it is. 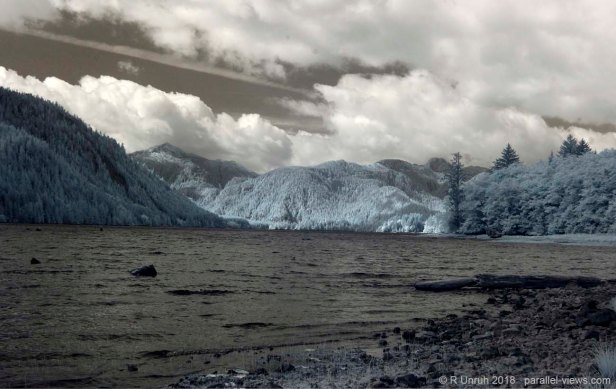 At 680 nm, the trees really pop out, especially with the ‘brown’ water and sky. 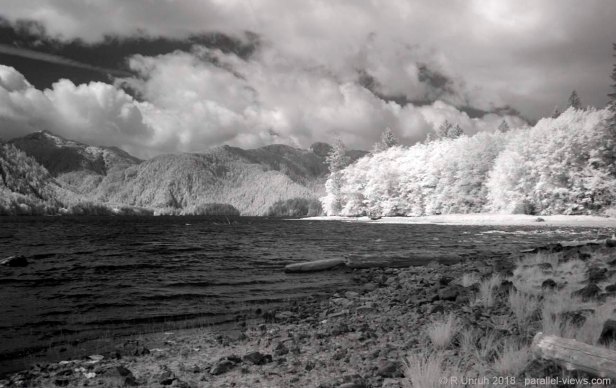 At 950 nm, the closer trees are almost too bright, as the sun was shining directly onto them. The distant hills are perfectly clear, though, and provide a good contrast to the dark skies.

There are trails going up both Mount Moresby and Mosquito Mountain; from the top, both the east and west shores of Haida Gwaii are supposed to be visible. Maybe I’ll get up there one day, but I didn’t on this last trip. I just stayed on the shores of the lake, took some photos, then ran away from far, FAR,  too many horseflies.  I could have stayed longer, but it’s a big island, and there was much more to see.

The above photos were taken with a modified Canon Rebel T3i camera.