Last post I talked about Craters of the Moon National Monument. To sum up:

2: Craters of the Moon National Monument is in Idaho.

2: If we take the name as fact, than the Moon is in Idaho.

1: If the Moon is in Idaho, than the shiny round thing in the sky isn’t the moon, just a mass hallucination.

I think that sums up everything anyone needs to know about my previous post, or all my previous posts(and enough jokes about the name for now; I’m pretty sure I’m beating a dead horse at this point). I also missed the important part; I mentioned that I had visited the park in 2011, 2012, and 2017. The latter time wasn’t ideal for exploring the area, as the eclipse had just passed by… not over the park, but less than half an hour’s drive from it. As a result, the park was packed bumper-to-bumper full of tourists. Additionally, It was a clear day(which was a miracle in itself, as it was very smoky the previous day), but the haze from forest fires was noticeable throughout the trip, and the scenery wasn’t as clear as I’d hoped.

On the other hand, this was the first opportunity I had to visit the park since I’d acquired a full spectrum camera.  Smoke and haze aren’t don’t necessarily mean bad photos, and I’d learned by then that a hazy day is just a chance to play around outside the visible spectra. 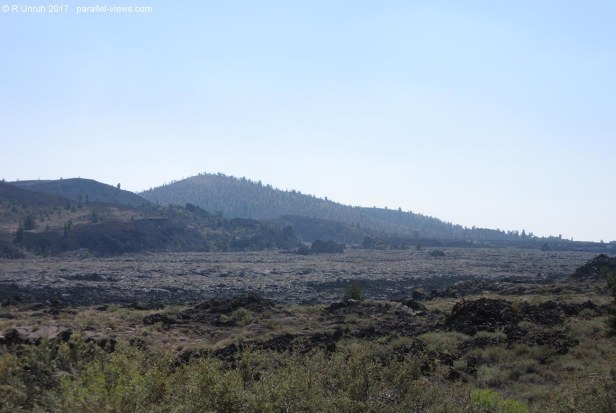 The above photo is a good example(don’t worry- the other photos are better than this, at least rising to the level of mediocre). The haze is enough to obscure the hills and wash out the entire photo. I can break it down into the blue, green, and red channels, but it doesn’t look good in any of them: 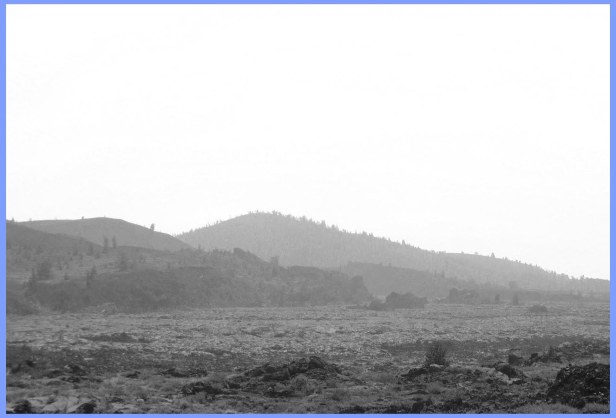 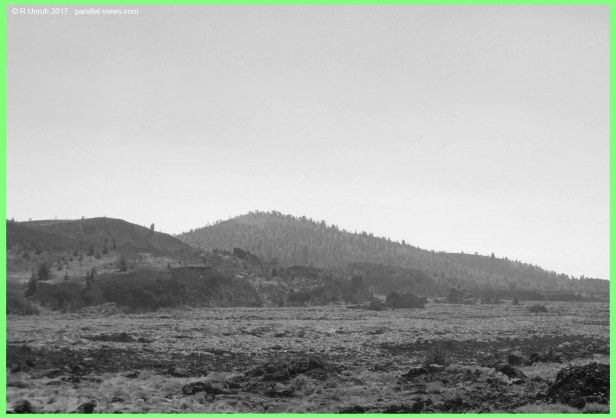 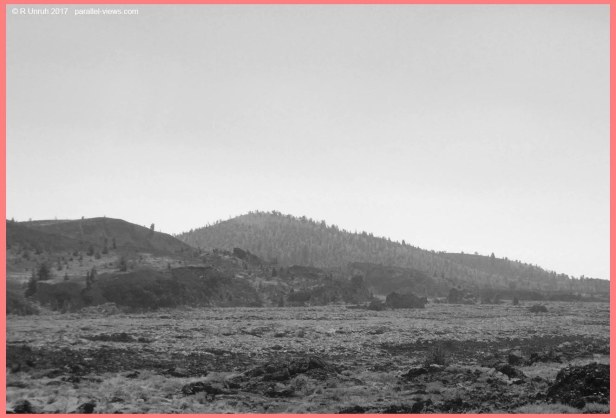 The longer wavelengths are better at cutting through the haze(in previous posts I stated that it was a result of Rayleigh scattering, but I’ve been reading more about it, and it may also be in part due to Mie scattering). The red channel is much clearer than Blue, but still hazy. 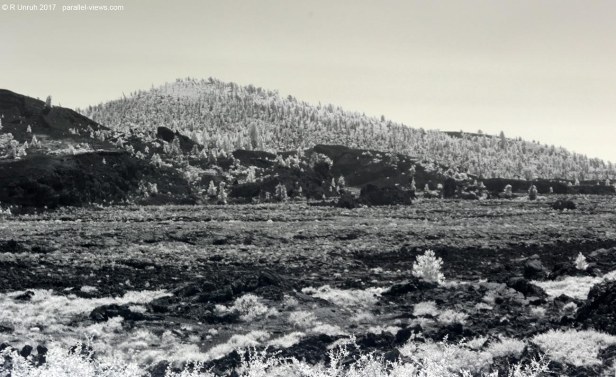 With my infrared filter ( Zomei 760 nm), the distant hill is clearly visible. Trees are usually white in my near-infrared photos, but it’s especially apparent here. The hardened lava is black outside the visible spectra. The contrast between the lava absorbing the light and the trees reflecting it is vary apparent. The sky on the horizon is still lighter than usual(especially as the sun is behind me and the camera). Normally, I’d expect it to be much darker, but the haze still has some effect on the distant atmosphere in infrared.

And now, lets look at an actually good photo. 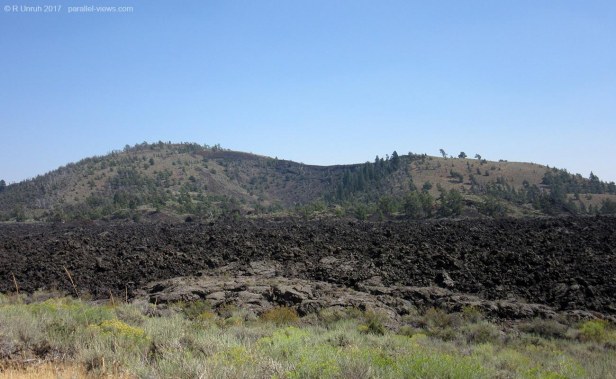 Still slightly hazy, but not as washed out as the above visible spectrum photo. The major difference is that the hills are closer, so there is less haze, but the direction of the sun was slightly different, and I think that made a difference as well. 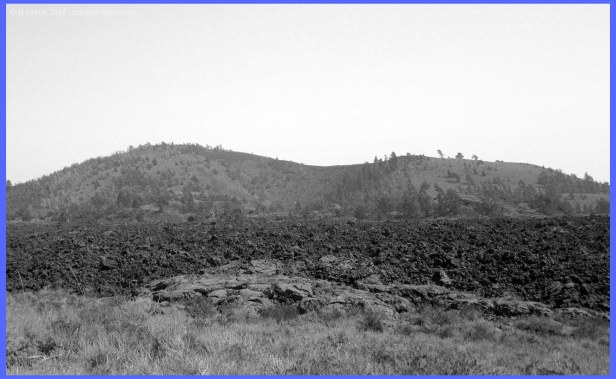 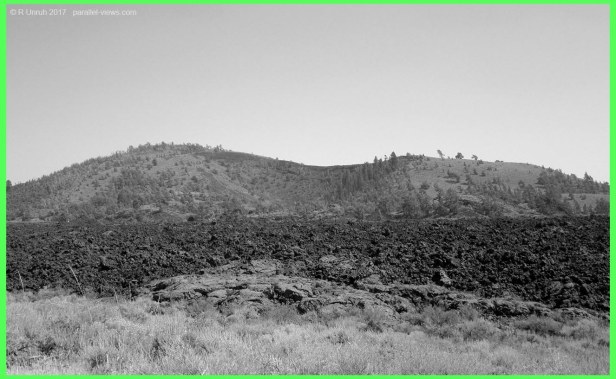 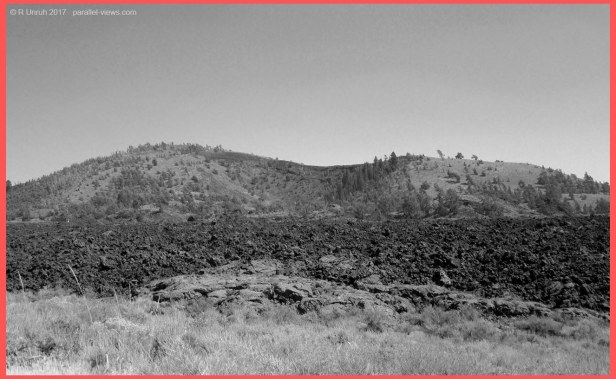 Breaking it into individual channels, Red is again the clearest, but even the blue channel allows the features of the hill to be distinguished. The lava looks fairly similar in all three channels. The shorter wavelength photo doesn’t look all that bad. It’s… acceptable.

…I have to post an ultraviolet photo now, don’t I? 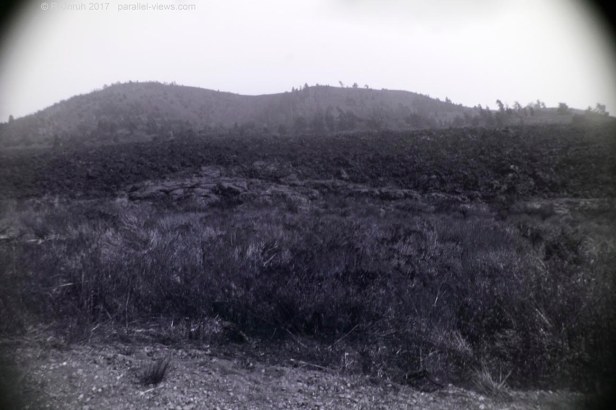 … and that is not acceptable. I used my triple-stacked filters for this photo(Combining a Schott BG40 and UG11 with my short pass filter) to eliminate any infrared light. Maybe I should have left some in?

Foliage absorbs UV light, so it always looks dark. As the lava also looks dark, there isn’t really much contrast in the landscape. the only contrast is between the overly bright sky and the dark land. The haze has come back with a vengeance, and the hill is hard to see through it. 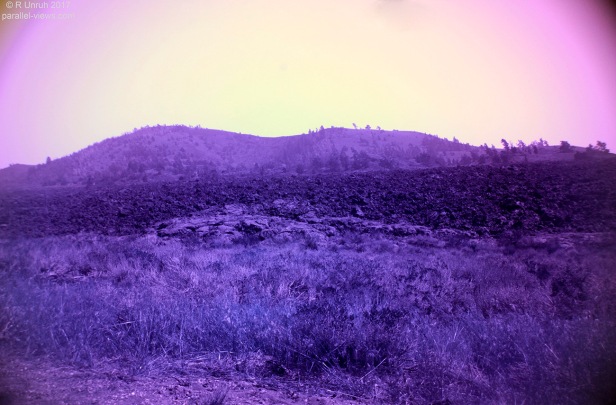 I mean, the photo taken with my short pass filter(blue, violet and some UV light) has the same problems, but at least it is a pretty purple colour. As mentioned before, the colour is solely due to the fact that my camera cannot  adjust the white balance to compensate  for the colour of the filter, but at least it is somewhat interesting. The trees on the hill are easier to see than in full ultraviolet, as the visible spectrum does have an influence on this photo. It’s … okay, maybe? Not really a ringing endorsement for the short wavelength.

I want to see a prettier photo, now. 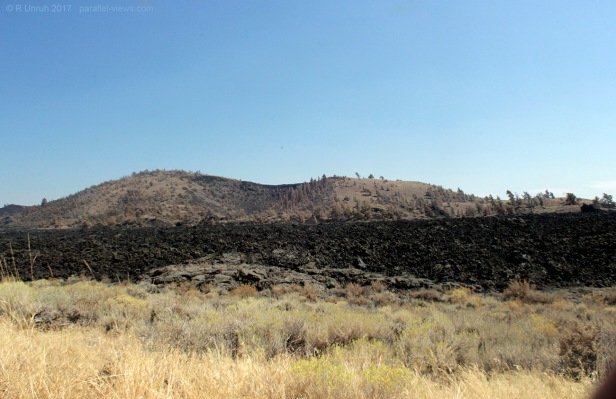 Full Spectrum- no filters to restrict the light entering the camera. The foliage looks redder due to the infrared light. The trees actually look dead, as if the forest fires already passed through.

Of course, with no filter, ultraviolet light can enter the camera too, but as the lens blocks most of it, and my camera isn’t very sensitive to the small amount that does pass through, the photo is pretty much a combination of just visible and infrared light.

The ground in the dip in the hill is slightly darker than the rest of the hill. It is noticeable in the visible spectrum photo as well, but there, it seemed like it could be mostly caused by shadows. With the infrared light added, the soil looks different. 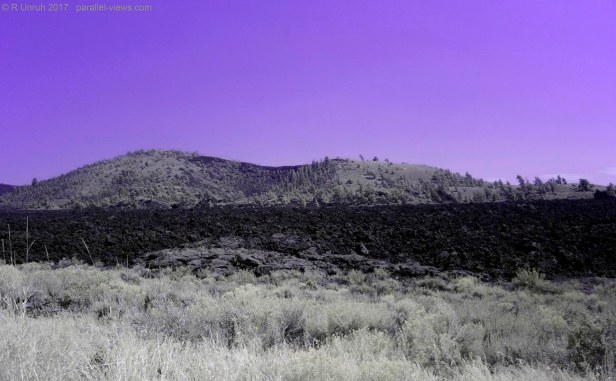 With a Schott UG11 filter(which blocks visible light, but allows ultraviolet and infrared light to enter the camera), that dip is much clearer. It is a different terrain, with more lava residue and less foliage. The lava field beneath the hill is still the darkest item in the photo, but that dip in the hill is becoming more interesting outside the visible spectrum. 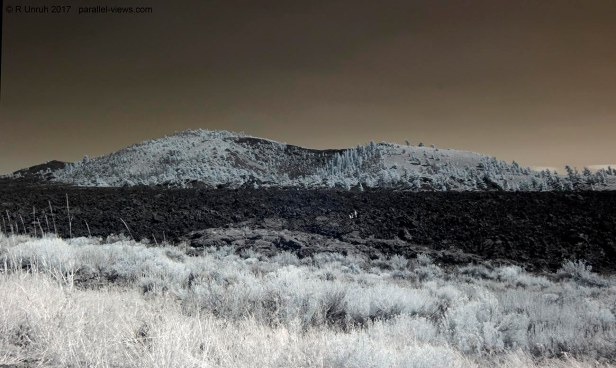 With the Zomei 680 nm filter, that dip is clearly exposed soil, and probably lava. Now that the camera is recording infrared light, the trees are much lighter, and the haze has diminished significantly. 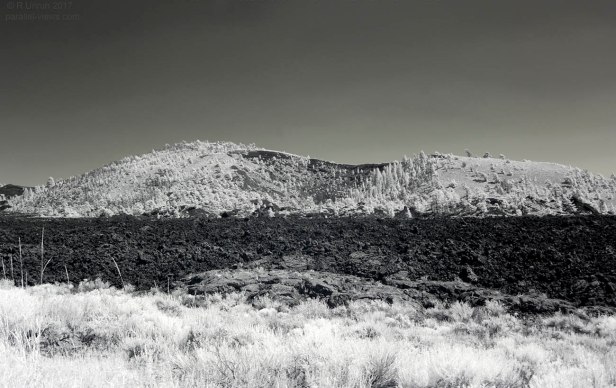 There isn’t  much difference in a photo taken with the Zomei 760 nm filter(other than the greatly reduced colours). The trees and other foliage are much brighter than the lava and soil, and the haze is almost entirely gone. I didn’t take a photo with my 950 nm filter, so I can’t say for sure, but it certainly seems as if the near-infrared photos don’t hold any surprises.

However, what about the not-as-near infrared?

My Seek Reveal thermal camera has a fixed zoom, and is low resolution, so this photo is a composite of several photos I took of the hill.  It’s set to the ‘white’ colour filter; the warmer the object, the lighter the colour.

In the thermal infrared range, the lava is much warmer than the trees. That makes sense; it’s almost black, so it absorbs a lot of sunlight(and it was a hot, sunny day). The energy has to escape somehow. The sky is cold, because of course it is, but the haze from the fires does absorb some solar radiation.  As there is more haze at the lower angles, that makes the sky near the horizon warmer than the sky above.

I’m going to have another post about these lava beds next post(or perhaps the post after that if I can make a Halloween one for next week), but as the next batch of photos aren’t within the park boundaries, I figured I’d separate them from this post. So, I’ll end on a cliffhanger.

WILL OUR HAPLESS comic relief SURVIVE THE LAVA BEDS? WILL HE FIND THE REAL MOON? WHERE IS IT? DOES THE ECLIPSE HOLD A CLUE?

TO BE CONTINUED ON THE NEXT EXCITING EPISODE OF PARALLEL VIEWS!

Other than the thermal photo, all the above photos were taken with a modified Canon Rebel T3i camera