I thought I’d set this post up to go out automatically a couple weeks ago, but it seems to have not happened. Also, there is no evidence that I had ever set this up, so there is only my own word that this occurred.

I’d mentioned that I had planned a third post relating to Craters of the Moon National Monument. [insert bad joke about going to the moon here- I’m bored of making them myself]. Posts one and two are talking about the park itself; this one was just outside the park borders on US Route 93.

After my eclipse viewing in 2017, I had been enjoying the landscape Idaho, experiencing for myself the mysterious phenomenon of the wild American traffic jam. By the time I pulled off to ake these photos, it had been slow driving and gridlock on the highway for 2 hours, and no sign of it stopping. Ever. If I had not decided to take a minor branch into Nevada, I’d probably still be waiting there. I would have developed an elaborate sign language to communicate with the other drivers. We would be known as the Road Peoples, and form the core of a new and powerful empire. I would have been known for my strict but fair rulings, and rise to become leader in the New Interstate Order

Ah well… missed opportunities. Instead of accepting my destiny, I decided to pull over and have a lunch(I had already left the visitor centre at Craters Of the Moon National Park, and skipped lunch there, as there was nowhere to sit down with the crowds). Instead, I found a small pullout across the highway from the park boundaries, and ate my lunch below a sign for “Goodale’s Cutoff”, whatever that is.

The pullout was very scenic; there was still hardened lava peeking through the brush, but it had mostly been covered. A lake by the pullout meant that the vegetation could stay green in the dry summer(The lake is officially called Lava Lake, even though it looks more like a pond).

Still hazy; There were a number of forest fires in the area. Breaking the photo down into the red, green, and blue channels, there isn’t much unexpected: 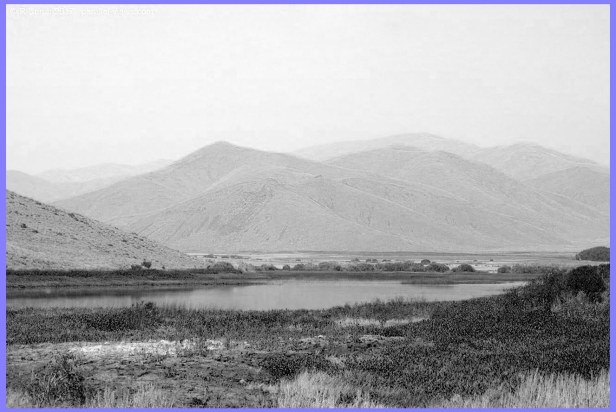 There’s not much new to say; the haze is most apparent in the blue channel, and least in the red. The volcanic rock is about the same shade as the living vegetation in the red channel, a bit darker in green, and slightly brighter in blue.

In infrared(with my Zomei 680 nm filter)…

The picture is zoomed out. This is obviously a side-effect of infrared, and not at all due to the fact that I only brought a fixed prime lens and couldn’t zoom in(I did consider cropping it on the computer, but the photo didn’t look as good cropped). The smoke is still apparent on the horizon, but there is much less haze than in the visible spectrum… nothing new here. What is interesting is the clear comparison between the growing and the dry vegetation. It’s fairly noticeable in the rad and blue channels above too, but here, the colour makes it obvious.

And now for ultraviolet. I used my usual combination of Schott BG40 and UG11 filters. I had to set the camera up on a rock to keep it steady; with the haze, the exposure times were very long in UV.

Well, it looks… umm… like a photo. Very photographic. The haze is much worse in the short wavelengths, which is expected. The camera exposure was 1/5 of a second- not too bad(at least for ultraviolet photographs with my camera), but enough that I couldn’t just hold the camera in my hands.

I actually like taking UV photos; They almost never look ‘good’, in my opinion, but they usually look ‘interesting’. I wish I had photographed the rock in the foreground with my other filters; the ring on the rock is very interesting, and I’d love to see it in other spectra. There is a faint green tinge to the vegetation; I think that is just a result of small amounts of infrared light leaking through the filters, but I didn’t take a triple-stacked UV photo with my short pass filter to prove it. If anyone is interested, here is the above UV photo again, but with the colour saturation bumped up to a ridiculous amount.

…And doesn’t it look awful. The greesn seems to occur in all vegetation, not just the growing plants, but is also affected by the haze; the distant background

And that was it. I only took a few photos from here, and didn’t use all my filters and cameras.  After a nightmare of waiting for another vehicle to let me back onto the highway, I had to deal with the gridlock for another two hours. I ended up in Twin Falls, Idaho, which I’ll definitely have to write about some time. From there, I went into Nevada, and through some of the emptiest roads of the trip. Great scenery, though.

Now, if you’ll excuse me, I’m off to find a traffic jam. My people are waiting for me.

The above visible spectrum photo was taken with a Canon Powershot SX600 IS camera. The infrared and ultraviolet photos were taken with a modified Canon Rebel T3i camera.