I covered the Vegreville Pysanka before. However, I visited it again last summer, and this time I brought my full spectrum camera. What I found was so chilling, so horrifying, that I am writing this urgent warning to all Canadians; the date is obviously just a coincidence. ‘That doesn’t make sense,’ you may think, ‘Why wait seven months to give an urgent warning?’. Look, I had a lot of things on my plate. I had to finish a lot of procrastinating before I could write this; you know how long that takes.

These photos were taken shortly before dusk; it meant that I needed to take a long exposure for the shorter wavelengths. It doesn’t explain my results at all, but it is still worth mentioning. The photos seem to have been taken for different angles. That is easier to explain; they were taken from the same angle, but the egg pivots.

What did I find? to sum up my research… That egg ain’t right.

This is the Pysanka(Ukrainian Easter Egg). The last time I wrote, I covered the ‘official story’; it was machine designed to celebrate Vegreville’s Ukrainian heritage, and was the worlds largest Pysanka until that title was stolen by… a city in Ukraine. You win that one, Ukraine.

Is there more to the story, though. My cameras hint at something dark. Not the visible photos, of course; To the naked eye, the Pysanka looks fairly normal. Breaking the above photo into the red, green, and blue channels, it gets slightly weird:

The orange hexagonal pattern at the ‘bottom’ of the egg is clear in green and red, but blends in with the rest of the egg in blue. In fact, it is even darker than the dark patterns on the egg. In some cases, however, a very similar orange tile is clearly lighter in the blue spectrum, as seen along the side. Perhaps it is the angle of the sun on some of the tiles?

The full spectrum photo is similar to the visible spectrum one; the colouring of the lighter tiles is slightly paler, a bit less reddish and more tan. And, of course, the trees are brown, but that’s normal in full spectrum; it’s not like a twisted reality is rendering the landscape unsuitable for earthly life.

… and in the 950 nm one too. The longer wavelengths actually seem normal; the issues are with the shorter wavelengths. So, lets examine them instead. First off, my dual band infrared/ultraviolet photo.

Still nothing. There is a bit more colour gradiation than I expected on the lighter tiles; you could almost tell which ones are white in the visible spectrum, and which ones are coloured. It is much clearer if I pump the saturation way, way, up, to ‘fever dream’ levels. 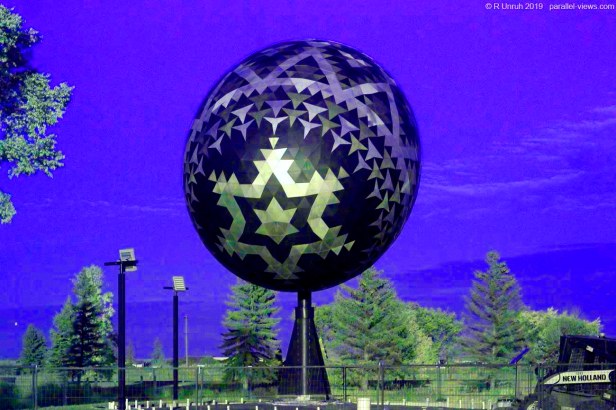 It could almost pass for a normal photo… while not a ‘normal’ one, but a visible spectrum one where someone badly tried to alter it. And if I cut out the infrared entirely?

Okay, this does look weird, but every photo with my short pass filter looks weird until I set the balance.  I kind of like the aesthetic, at least sometimes, but it really isn’t useful like this. Set the white balance, however, and…

It just looks like the blue channel again. No surprises You might think that I’m wrong about my warning; there’s nothing too irregular here. I wish I was ignorant again, thinking all was well with the world. However, the above filter still is mostly blue light, with only a bit of ultraviolet light passing through. Lets go all the into ultraviolet.

This is the last chance to stop reading; go, leave. Ignore my warning; keep your innocence. If you continue past this point, there will be no answers, only questions and a gnawing darkness.

Still here? Then at least you will be prepared for what is to come. Ultraviolet time.

At first, it just seems like a blurry photo. Then you realize that it isn’t blurry; the hexagonal tiles are in focus, and nothing else is. Here is another photo with the same filter combination.

The filter combinations normally show very little colour. In fact, they still don’t show any colour except for these few tiles. I haven’t seen brownish colours in that camera setup before… ever.

That also doesn’t explain why these few tiles are in sharp focus, and only these tiles. I was using a large aperture, due to the low light, but it shouldn’t matter that much. Only tiles of that specific colour are in focus, even adjacent tiles(like the white ones) are blurry.

I couldn’t triple-stack my filters and block the tiny amount of infrared leakage; the light was too low for a long exposure. So maybe, just maybe, the small amount of infrared light leaking into the camera, coupled with the low level of UV light  due to the sunset, was enough to make the tiles a weird colour? Maybe, as it stood out more than I expected, I was focusing my lens on the infrared light, and not the ultraviolet light? after all, the wavelength are far enough apart that the camera focus is slightly different for each one.  And maybe, even though the other tiles were clear in infrared as well, there was enough UV light to make them blurry?

Or maybe the pysanka is sending a message; that the egg is real; the EGG is all, and the rest of our reality is an unfocused backdrop, in unimportant nest sheltering EGG. The only focus is EGG. Stare into EGG.

… or maybe it is a red herring(I’d call it an ultraviolet herring, but that pun is too bad even for me). Maybe the ultraviolet is camouflaging something even worse. My infrared photos didn’t really seem exceptional. The two filters got to the limit of what my full spectrum camera is capable of photographing. It’s not like I traveled around the country with a different infrared camera to look more deeply into the spectrum.

… except I did. I brought eight cameras with me, which is not a joke and says something worrying about me, but enough about my issues.

The Seek Compact Pro camera is a thermal infrared attachment for a smart phone, and is the newest addition to my camera collection. It is much higher resolution than my older Seek reveal camera, allowing me to see more detail. And it shows that the bottom hexagonal pattern tiles are cooler than the dark ones, as they absorb slightly less light, and it was a clear day, with only a few clouds on the horizon, and that there is a strange, icy cold hole in EGG.

Why is there a hole there? it doesn’t seem to be in any of my other photos. Maybe it is to let air out when it expands with the heat? That would make sense, but why is it cold in late afternoon/early evening? Not to generalize, but hot air is generally warmer than cold air. The thermal camera does show black at extremely high heat above the camera’s limits(626° F or 330° C); I’ve seen this for myself when photographing fires. However, if THE EGG is heating up to over 330° C, there are some issues with it. But as I said, I didn’t notice a hole in the top of the egg, and the rest of EGG doesn’t seem warm enough, and it doesn’t look like right for an extreme temperature, and…

Okay, maybe it is just a dead pixel or some camera glitch. Is it still there with other settings?

…Yes it is, and it seems even clearer. In fact, it clearly is getting colder around the… I want to say ‘hole’, but I don’t know if it is one.

So, to sum up. We have a normal looking giant egg sculpture, or as normal as a giant egg sculpture can look. However, in ultraviolet, it shows strange angles that are in focus, and only they are in focus, like something from outside our physical laws. In thermal infrared, there is a gaping hole to an unknowable darkness that does not exist to the naked eye.

I think the EGG is hatching. I think we are starting to get a glimpse of what is inside.

To all readers, enjoy this Easter, and be sure to say anything important to your family now. To the residents of Vegreville, be proud that your sacrifice gave us time to clear the Yellowhead Highway and saved many lives, or at least prolonged their suffering. And to whatever came from the unknowing EGG, If you spare me, I will honor you, and am willing to photograph you in a manner that a being like you deserves.

The above photos were taken with a either modified Canon Rebel T3i camera or Seek Thermal Pro compact camera.

One thought on “Revenge of the Egg!!!”