The RCMP Musical Ride is one of those iconic Canadian experiences, so it’s embarrassing to admit that I never went to see it until 2013. Every year, the 32 riders tour around the country; that summer, the Musical Ride tour was stopping at my home town. It was well worth seeing.

I had just started using a full spectrum camera(a modified Panasonic Lumix) at the time, so decided to take it to the ride. I brought my Zomei 720 nm infrared lens filter, and a normal camera(a Canon Rebel t3).

It looked like the ride was going to be held in a rainstorm, but by the time it had started, the rain had cleared up, and a rainbow was visible to the east. 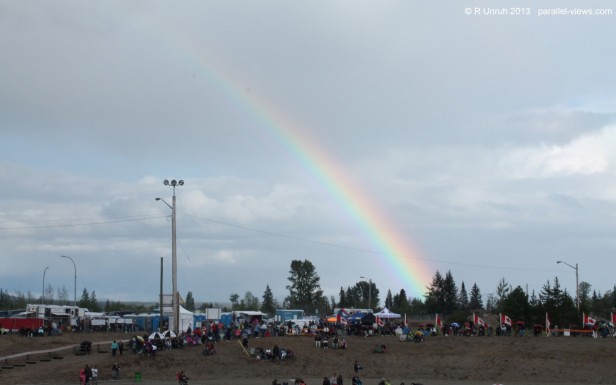 The 720 nm filter still allows some colour through- you can see faint blues and browns in the photo. Looking back, I think that it was the best choice I could have made for a filter, as the ride took place in early evening, with fading light. Filters in the deeper infrared range would have needed a longer exposure. As I’d be taking photos of moving animals, it wouldn’t have turned out as well.

I only took one picture of the ride itself in which I could compare the visible and infrared views.  As the riders lined up to start the ride, I took this photo:

When it is broken down into the blue, green, and red channels, each view is quite different. In the order above, here is how each channel appears. 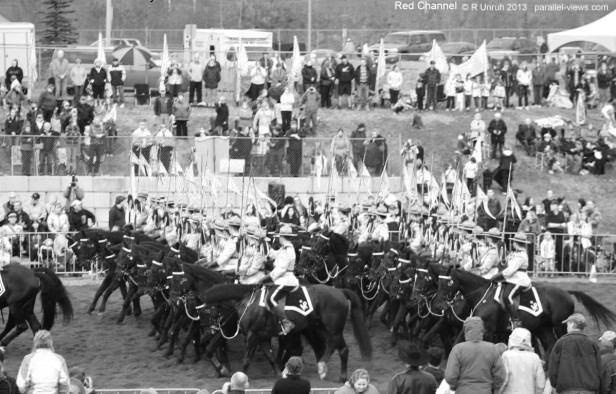 The main difference is obviously in the colour of the clothing people wear. It is a great example of how the look of the channels can differ. The red serge of the riders is light in the red channel, and almost black in the blue. The Canada flag looks like a white flag in the Red Channel.

In the near infrared spectrum, most clothing becomes much lighter, though. 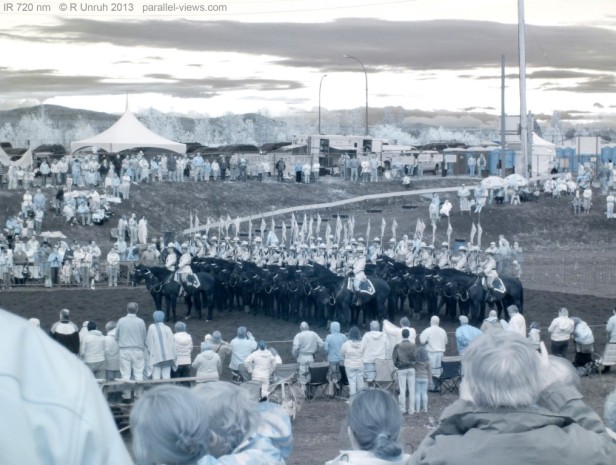 With the 720 nm filter, there is still some variation in clothing colour, but much deeper, and the majority of clothing appears ‘white’. Most clothing dyes do not have any effect on near infrared wavelengths, so even black clothing looks bright.

Once the horses started moving, I couldn’t use the infrared camera any more; the motion was too fast for a good photo(by that time, I was needing exposures longer than 1/30 of a second). I did get some good pictures in the visible spectrum, but soon the sun had set and it was too dark for even that. It turned out to be a beautiful evening, and a memorable event to watch.