This is a kind of follow-up to my earlier post “Cutting through the Haze“.

The wildfires throughout British Columbia are still bad, but some of the communities are being allowed to return home. Williams Lake is still the largest community that has been evacuated, but there’s hope they may be able to return home soon. A few new areas have been evacuated, near the community of Clinton, and almost 20 000 people are still out of their homes. The forecast is still calling for hot, dry weather, so most returning residents have to be ready to pack up and evacuate again if conditions change quickly. Again, donations to the Red Cross can be made here.

Prince George has avoided the fires so far, but the smoke has been bad in the area(not for the last couple days, though). During one of the hazy days, I decided to go to a lookout over the city, and test my lenses out in the haze. This day was moderately hazy, but the weather was much worse later in the week; I tried a couple infared lenses, but even they couldn’t cut through all the smoke.

To start with, Here’s the picture of downtown Prince George in the visible spectrum. I’m including two photos- the top one is taken ‘as is’, and the other has had the contrast enhanced for slighly better visibility. 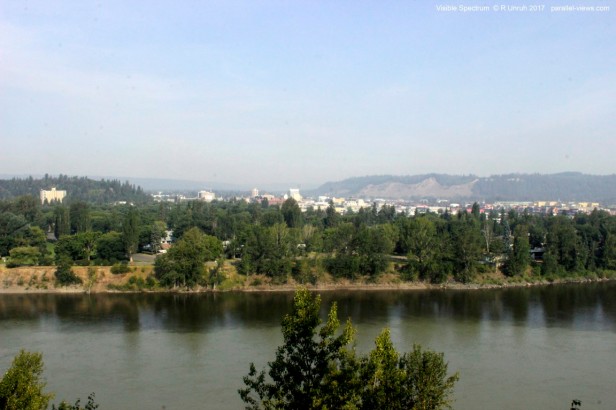 I didn’t have another camera limited to the visible spectrum at this time, so I used my Schott BG40 lens for the above photos. This blocks infrared light(and also some light deep in the red side of the spectrum). It does allow ultraviolet light in, but my camera has little sensitivity to the UV range, so the pictures look pretty much as if they were in the visible spectrum(and for all intents and purposes, I think they are).

It looked hazier in real life than with the camera. Maybe I was remembering it wrong. To get an idea of the scale, I labelled the distances to several points- if I didn’t describe what I was pointing at, just assume that it is the largest building under the arrow.

The hill on the left is called Connaught Hill. In the distant background, a long hill is faintly visible. The hill is 6.8 km away as measured directly to the right of Connaught Hill, with the distance increasing as you move right. directly behind the 2.4 km distant building, the hill is at 7.6 km. I’d say that the visibility is about 7-8 km, but not very much detail can be seen at that range.

As always, here is the visible spectrum photo(for the contrast enhanced photo) divided into the individual Blue, Green, and Red channels.

As with my other photos, the blue channel shows the most evidence of the haze. The hill in the background is barely visible, and even the cutbanks are faded. Green is… well, there’s not much to say about it- the haze is better than the blue channel, but worse than the red. For the red channel, the outline of the hill in the far background can be distinguished, and even the clouds behind the haze are slightly visible(if you look close, they’re barely visible in the green channel as well, but are slightly clearer than the red channel).

Beyond the visible spectrum, however, is a different story.

With no filters on my camera, the full spectrum view is slightly clearer. It allows in both ultraviolet light and infrared light, but as I said, my camera isn’t good at detecting UV light. With the full spectrum view, you can see the distant hill slightly better, being able to distinguish a bit of colour variation, but it is still hazy. However, the clouds are much clearer now.

Into the infrared range, I had a chance to use all my lens filters(all Zomei brand ones). They are all much better at cutting through the smoke and haze.

Even the the Zomei 680 nm lens, which included visible light at the far end of the red spectrum, is significantly better at viewing distant objects- the far background is clear. It is hard to distinguish the far background from it from the nearer hill to the left, called Connaught Hill. The clouds can also be clearly seen, although the horizon still looks slightly hazy. One advantage with the 680 nm lens is that there is still a faint colour in the photos- trees look slightly bluish, while the sky has a brown tinge. This works well for the photo of the city- the buildings are a different colour than the vegetation, and are easier to distinguish.

At 760 nm, the colour is very faint, but still there. The buildings are the same shade as the foliage now, and are hard to distinguish. 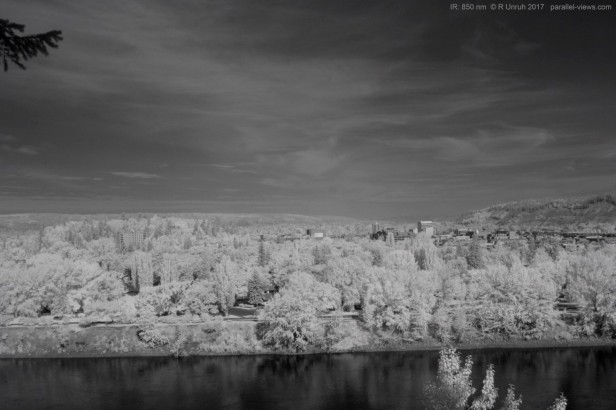 At 850 nm, everything is greyscale- my camera can no longer pick up any colour variation. 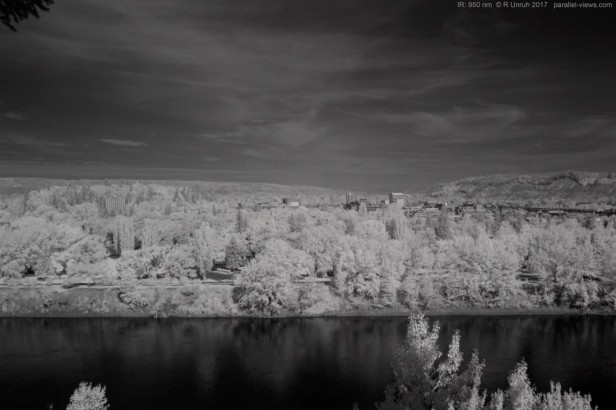 Finally, 950 nanometres. The sky is slightly darker than at 850 nm, but the trees are as well, so it might just be an exposure issue. At 950 nm, I don’t see any evidence of haze on the horizon. In all, this reaffirms my conclusion in my ‘cutting through the haze’ post. The longer the wavelength, the better the visibility.

I didn’t bring my thermal camera, so 950 nm is as deep into the infrared as I explored. However, this time, I took some photos  in the ‘other direction’- that is, ultraviolet.

To start off, here is Prince George as seen with my (Schott brand) UG11 dual band filter. This filter allows most Ultraviolet light through, as well as a small amount of infrared light. However, as my camera is much more sensitive in the infrared range than the ultraviolet, I have a feeling that IR light is a major component of this photo. The UG11 lens is an important part of my UV photos, and will appear again in this post.

This particular photo is still clearer than the visible light photo- that is still just the effect of the Infrared light, as I’ll show in the below photos. The haze is more noticeable than in the ‘pure’ infrared photos, however.

My short pass filter allows ultraviolet, violet, and some blue light to pass through. This is a newer filter- I lost my original short pass filter during the spring. The pictures seem to be the same as with the original one, as far as I can tell. This filter allows light to pass through at a beak of 380-390 nm, just a bit lower than the wavelength for visible violet light. There is supposedly no light with a wavelength longer than 500 nm passing through this filter, and very little light above 450 nm. And like my original short pass filter, I cannot set a proper white balance with this filter- this is as close as I could get(yes, I could do a monochrome photo, but I like to keep as much information as I can).

With the short pass filter the distant hills are much harder to see., and the clouds are invisible. The haze looks much worse in general. Given the distances above, I’d say the visibility is less than 7 km with this filter. Now, onto true ultraviolet.

Ugh. Much worse. This is using my BG40 and UG11 filters together. The UG11 filter lets the UV and IR light through, and the BG40 removes the IR light, leaving just the UV. Probably due to my camera’s sensitivity, the photo is very near to the visible spectrum- I’d guess the wavelengths recorded would be between 370-390 nm range. As my camera isn’t good at UV photos, this photo needed a 2 second exposure in order to acquire enough light.

It isn’t very obvious, but there is some slight colour variation to this photo. The trees are very faintly green, and the sky and water are monochromatic. It doesn’t come across very well; I could boost the saturation, but I don’t like to alter photos more than I have to.

According to this site, there is some infrared leakage when the filters are combined like this. One advantage of my new short pass filter is that it is the same size as my other filters, meaning I can now combine it. So, finally, one more UV picture with all three of my ‘shorter wavelength’ filters. 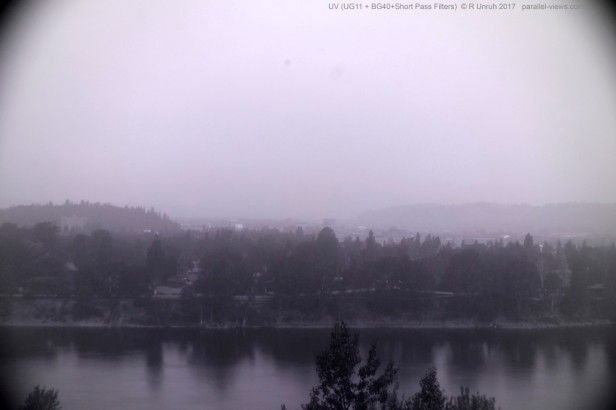 This photo needed an exposure of over 8 seconds(the short pass filter also cuts off most light with a wavelength shorter than 360 nm), and I still had to boost the ISO to 3200. I’m not sure this picture was worth it…at least from an artistic standpoint. Looking at it scientifically, however, and it is very interesting.

This photo looks much like the previous one. That faint colour I mentioned is gone now; it might have been an artifact of infrared leakage. If anything, the haze is slightly worse in this photo- the distant hill could still be very faintly seen to the right of Connaught Hill in the UG11+BG40 filter photo, whereas I can’t see any evidence of it in this one.

All of these photos were taken with a modified Canon Rebel T3i camera.

2 thoughts on “Cutting Through the Haze(again)”