It’s 10:00 AM right at the time I’m writing this, and too dark to read a newspaper. So, In my third installment of Cutting Through the Haze, I thought I’d….

That title doesn’t work anymore; this isn’t just a hazy day; We’re WAY beyond that. The sky is faintly brown/red, but mostly it’s just dark. An ‘hour after sunset’ level of dark. And I’m not ‘cutting through’ the haze anymore; nothing is cutting through this smoke. The sun officially rises before 6:00, but it doesn’t feel like it.

So far, my town isn’t on any evacuation alerts or orders(I don’t know how it is in other countries or provinces, but here, an ‘evacuation alert’ means be ready to evacuate; an evacuation order means that it is time to evacuate, and the government will enforce that).

I’ve lived in Northern BC for over 25 years, most of my life. This is the third time I remember the clouds being like this(and four days ago, it was close, but not quite ‘nighttime’ dark).  the first was in July of 2014, around 9:00 AM. 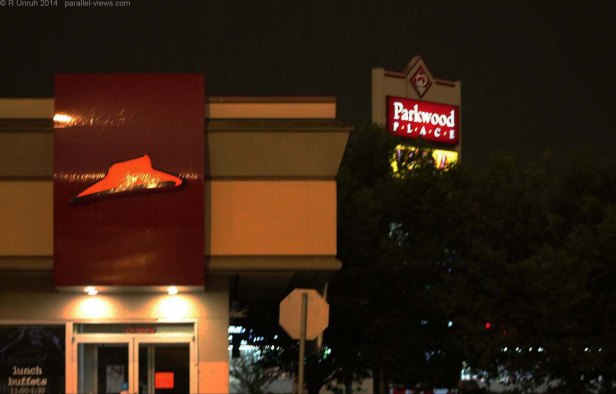 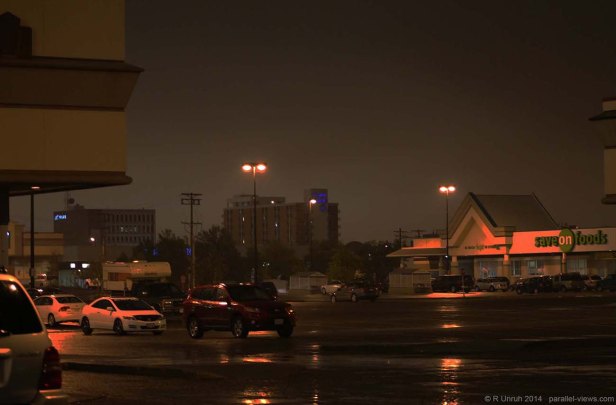 By 10:00 AM, it had started to ‘lift’; by lift, I mean if I strained my eyes, I could probably read without extra light.

The second was almost exactly a year ago, at 6:30 PM. That had the bonus of being accompanied with a thunderstorm. Not the best time to be swimming; to be fair to myself, I started swimming before while it was still light-ish( still dark and smoky, but bright enough you could tell it was daytime), and the smoke was enough to obscure the approaching rainstorms.

It was still dark enough to need a flash for this photo, though, which is why it looks so strange.

An hour later, it was BLACK. 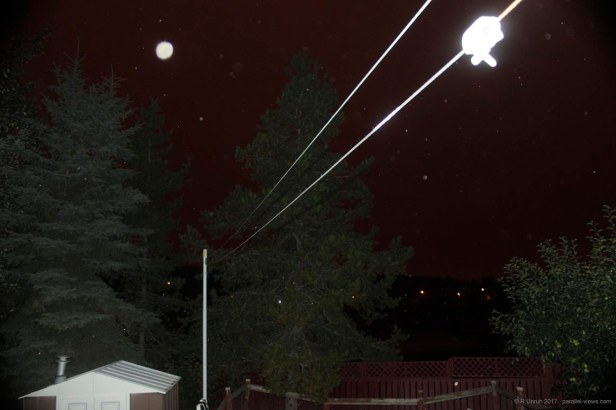 The white spots in the sky aren’t lights or stars; they’re flakes of ash falling. For comparison, here is another photo, taken with the flash…

This time, the darkness didn’t go away; it transitioned into true night, and never got lighter until the next morning.

The strange thing about these events is that it isn’t a pea-soup fog type of haze; the smoke isn’t at ground level, so it is possible to see quite far off. It is probably moderately hazy, but it’s so dark that I don’t really notice.

I briefly experimented with my full spectrum camera when the 2017 ‘blackout’ happened.

The building in the centre with the lights on is about a half kilometre away. About 200 metres away is a small shed, in the centre of four baseball diamonds. Of course, you can’t really see much of that in this photo. For reference, Kept the ISO at 800 for this and the following photos; in this specific visible spectrum photo, the F-stop was at 4, and the exposure was 1/13 of a second. In comparison, at that ISO and F-stop, on a clear day, the exposure time would be well over a 1/1000 of a second.

…AND the photo would look better.

There is a clear pattern evident when the photo is broken into the red, green, and blue channels.

The shorter the wavelength, the darker the photo. Red has the most detail, while in blue, the outline of the tree is faintly visible, but the lights are the only clearly defined object.

Ultraviolet is a wash; I’m not even going to post the photos.  I tried to use my short pass filter(F-stop slightly lower at 3.5, or the lowest my lens could take; according to this website, that means the exposure is about 20% shorter than it would be at f/4.0). The exposure took eight seconds, and didn’t look much better than the blue channel. The short pass filter lets a lot of visible light in the violet and blue spectrum into the camera. A true UV-only photo with these settings would take much longer to take, and I expect that the exposure time would be well over a minute. My camera doesn’t even allow for exposures that long; I’d need to use a remote or manually hold the shutter down.

If the shorter wavelengths are darker, how about the longer ones?

Near-infrared(with a 950 nm Zomei filter) is a lot better. The smoke still obscures the sky, and the trees in the distance are a little hazy, but the  buildings and baseball diamonds are clearly visible. With a f-stop of 3.5, the exposure time was only a 1/13 of a second. 950 nm wavelengths and longer are nearing the edge of my camera’s sensitivity; photos take a lot longer to hit the right exposure normally. Under this smoke, though, the infrared landscape is still brighter than the visible wavelength landscape, and the exposure was about the same. 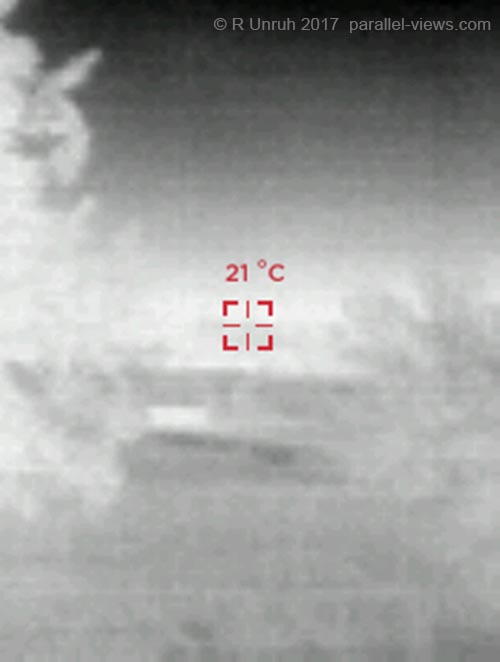 I think part of it is the low resolution of the cameras, but I think that a major factor is that the smoke in the sky is holding the temperature in. There isn’t the temperature variability that I would get on a clear day- the sun might heat some objects faster than others, but it doesn’t matter if the sun can’t get through.

I don’t usually do much full-spectrum photography, but this is how my camera detects light without any filters on the lens. A low sensitivity to ultraviolet means that my camera will mostly record visible and near-infrared light. Of course, in this situation, there is no ultraviolet light, and little visible light.

This photo was taken with a f/stop of 3.5. The exposure time was 1/25 of a second. In half the shutter speed of the visible spectrum photo, I took a picture with a lot more detail and better white/black balance.

Now lets talk about that colour.

I have to manually set the white balance when I’m taking photos outside the visible range(for anyone who doesn’t know what that means, I’m essentially telling my camera what objects are supposed to be white, and letting it determine colour in photos based on that information). I keep default white balances on my camera’s memory card to use- they were set on a clear, sunny day, using a piece of white paper as the guide. I prefer having a pre-set white balance; it means that I can compare my photos in a certain wavelength  to one another without having to remember how I set the white balance.

On a sunny day, a full spectrum photo looks like this: 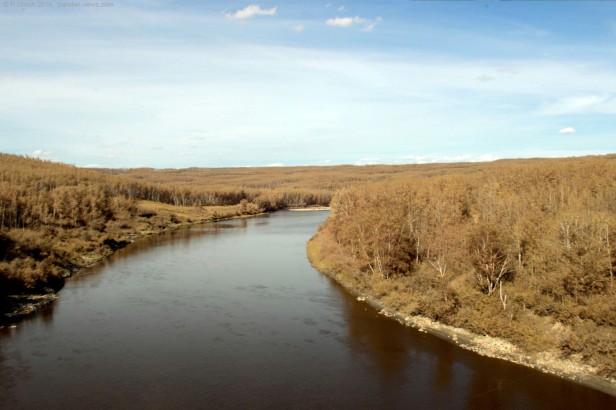 The green trees are yellow, but the photo looks very close to what can be seen with the naked eye. Cameras are designed to take photos in the visible spectrum; it makes sense that most of the camera sensitivity is to that range, even with the alterations to a full spectrum camera. This colour is what I’d expect from any full specrtum photos…

… but now the sky is blocking the visible spectrum. It is essentially acting like a giant infrared filter; just instead of putting it over my camera lens, it covers the entire sky. With the white balance set for sunlight, you get a strange photo like above.

Of course, I could try to clear the photo up even more. If I use photoshop’s ‘auto colour’ tool,  the result… 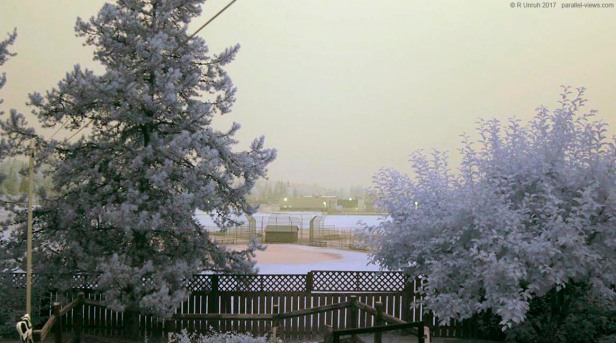 …bears a very close resemblance to infrared photos taken in ‘normal’ conditions with my Zomei 680 nm filter. This filter lets light with wavelengths longer than 680 nm into the camera- the light is close enough to the visible range that the camera can detect colour differences.

It might not be the easiest way to arrange a near-infrared photo, but it certainly works!

I took more photos today, and experimented with the different wavelengths in more detail. I’ll post some photos of the most recent ‘black dawn’ after I sort through and prepare them. Not today though. It’s 10:45 AM, and the sky is a little brighter. Morning is coming. Time to enjoy it! 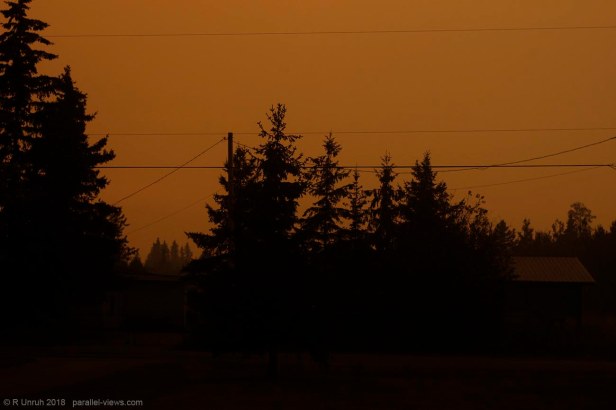 No posts for the next couple weeks; I’ll either be on vacation or evacuating… and I’m not even sure if that’s a joke right now.

3 thoughts on “Lost in the Smoke”