The Midnight Dome is a hill overlooking the Yukon River, and has some of the best views of the region. Dawson City(officially called Dawson, but everyone refers to it as Dawson City) lists it as one of the highlights of the region. In 1899, on the summer solstice, a celebration was held at the Midnight Dome to see the midnight sun… a celebration that was a bit of a let-down. The sun still sets, for about 2 1/2 hours. At 64° north, the city(and hill) are still below the Arctic Circle. Despite that, the Midnight Dome kept its name, and the solstice is still a big event on it.  Unlike the turn of the century, a ten kilometer long road goes all the way to the top of the dome, making it easy to access.

I visited in the Yukon August- I missed the solstice, but on the other hand, I miseed most of the insects. A good trade off, in my opinion. My first drive to the top of Midnight Dome wasn’t worth the time it took to drive there- the evening fog had set in, and the view was underwhelming.

You can kind of make out the edge of Dawson City there, and the Yukon River. A minute later, and they were entirely covered by the rapidly expanding fog.

Thankfully, the second trip was… also not great, as the fog hadn’t fully lifted.

I had camped out of town, and went up the hill before entering the town.  I thought that the clear weather I was experiencing would continue all the way to the river.

The THIRD time I drove to the top of the dome, the weather had finally cleared. Mostly. Around town, at least.  The fog was still hanging around in the distance, but had lifted enough that I could see  near the horizon.

The Yukon River continues off into the distance. The smaller Klondike River meets the Yukon River here- the dark, clear water of the Klondike is a sharp contrast to the silty water of the Yukon. The ‘Other Alaskan Highway’, the Top of the World Highway,  is visible above the banks on the right side of the river. The Top of the World Highway crosses into Alaska at the Poker Creek border station, where it is renamed the Taylor Highway.

The majority of Dawson City(and almost all the tourist attractions) is on the left of the above photo- this part of the city is the national historical site, including most of the turn-of-the-century historic buildings. 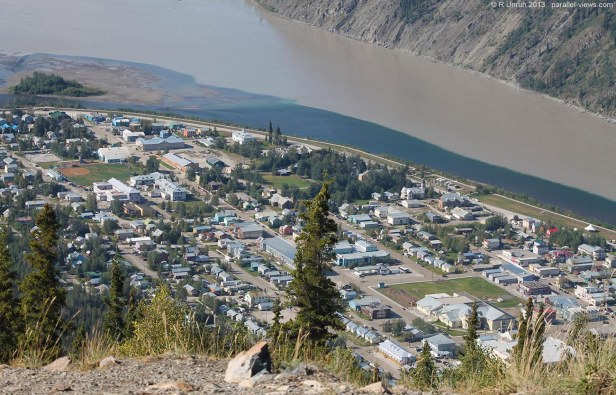 but back to the zoomed-out photo.

The day was slightly hazy, caused by major forest fires near Tok, Alaska.  It had been a dry summer in the north that year- I had driven by a major fire near the border along the Alaskan Highway.

The usual patterns are observed when this photo is divided into the three colour channels. The haze is most evident in the blue channel- strangely, this is the channel where the two rivers look most similar.

Trees are difficult to distinguish in this wavelength- they are much clearer in the green channel. 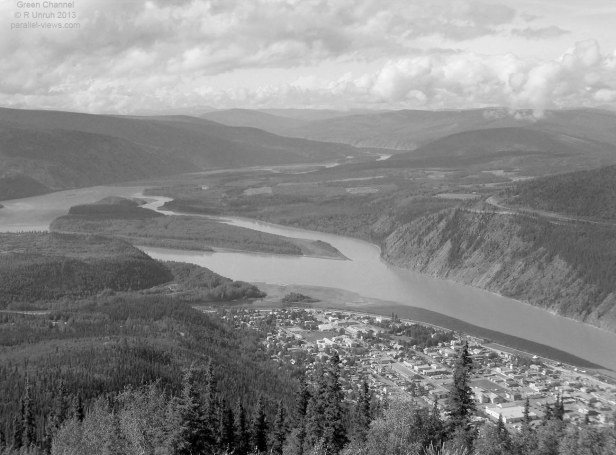 The red channel, as usual, seems to be the best for contrast- the haze is minimized, and there is a good balance of light and dark. I’d say the waters are at their greatest contrast in red, at least when compared to the visible spectrum channels.

With my Zomei 760 nanometre IR filter, the Klondike River looks jet black, while the Yukon River is still muddy. The foliage is bright white. Unfortunately, the town is as well, making it difficult to distinguish. With this filter, a photos look almost monochromatic, but a small amount of colour leaks through. The sky is faintly brown, and so is the river.

Looking the other direction, the Yukon River continues downriver. On  mainland, on the right side of the nearest island, is the Tr’ondëk Hwëch’in Native village of Moosehide,  but it is not easily visible in this photo.

This photo exhibits the same trends as the previous one when broken into the blue, green, and red channels. 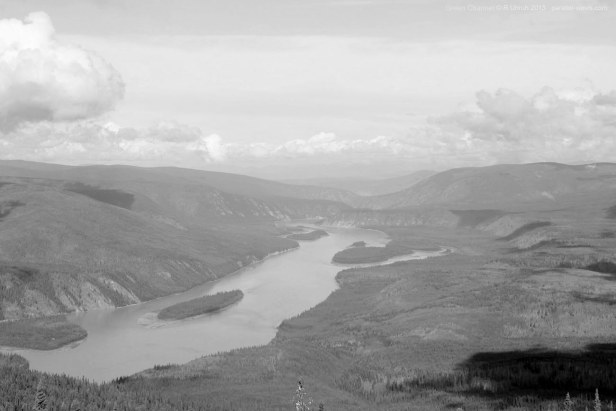 And they are very visible at 760 nm infrared.  I took this photo from a different location on the hilltop, so the nearest island isn’t visible.  However, most of the photo is the same. The ‘peninsula'(actually another couple islands, but it’s looks like a peninsula from this vantage point), shows in interesting feature- a bright ridge appears along the shore of the river, while the foliage in the interior is darker. This isn’t easily apparent in the visible spectrum, at any channel(it is faintly there in red and green, if you know what to look for). IT appears that the difference is caused by different plant types- the plants growing near the water are reflect much more infrared than the trees in the interior of the island. If the haze wasn’t as intense, it might be easier to see in the visible spectrum.

The Midnight Dome lookout offers some of the best viewpoints in the Central Yukon; you can see for miles. Just don’t going there expecting 24 hours of sunlight.