So, back to Barkerville. It was originally one of three boomtowns from the mid-19th century; Richfield is a short walk away up the creek, but not much still stands there.  The Richfield courthouse has been restored as part of the Barkerville historic site area. Camerontown was in the other direction. The cemetery survives, but not much else. Barkerville is the only one of the three to survive. The nearest town nowadays is Wells, 8 kilometres away- Wells was built in the 1920s, much later than the other three.

A fire destroyed most of Barkerville in 1868; it was rebuilt quickly, and The buildings date from after the fire. Barkerville doesn’t change quickly, but there are a few new additions.One of the fairly new features of the town is a short trail leading to a lookout over the town and valley. Last year, I went to Barkerville for the Canada 150 celebrations. I took these photos from the lookout.

First, lets establish a baseline in the visible spectrum. From the lookout, here is Barkerville: 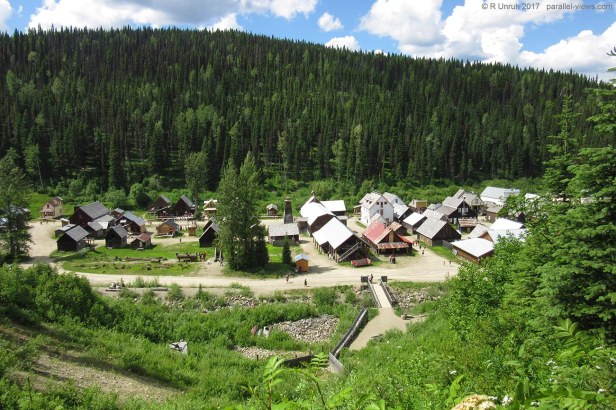 This isn’t the entire site; it stretches off in both directions. The tower of the old fire hall is in the centre of the photo. The fire hall itself, beside the tower, is used for plays. Most of the structures below can be explored- some have shops or exhibitions, while others have been furnished to resemble how they may have appeared in the past.  The bridge crosses Williams Creek; the creek flows from left to right in this photo, but the water can’t be seen from this vantage point.

The above photo can be split into the red, green, and blue channels. 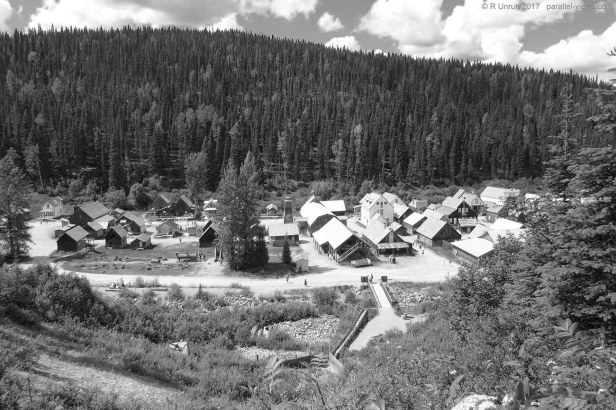 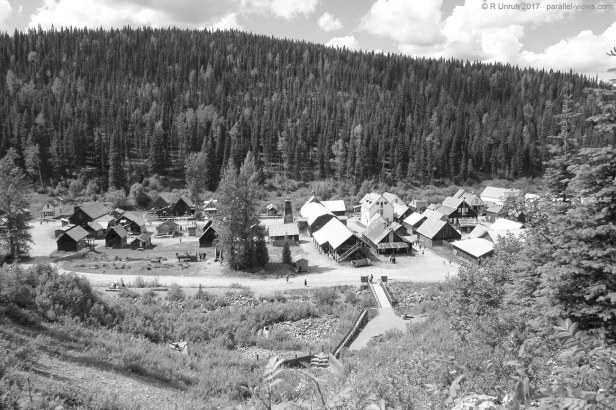 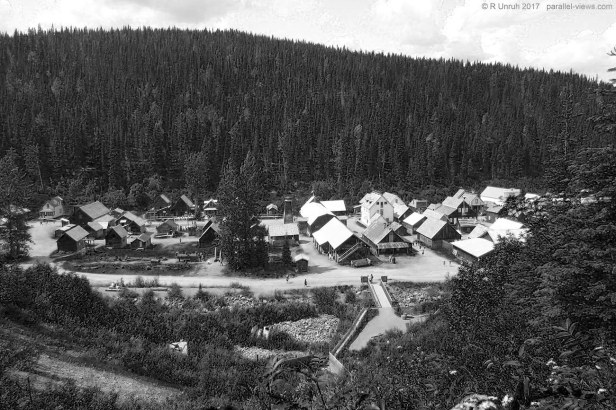 It is fairly clear across the valley in all three channels. The difference between the deciduous and coniferous trees are clearest in the red and green channel, but can only be faintly noticed in the blue one.

To me, the blue channel fits the scenery- it looks more like a vintage photo. Early cameras had a problem filtering out UV light- it give the early photographs that hazy, washed out look, and the darker foliage. The blue channel photo does a good job simulating that- add a sepia effect, and it would look like a turn-of the century photo. 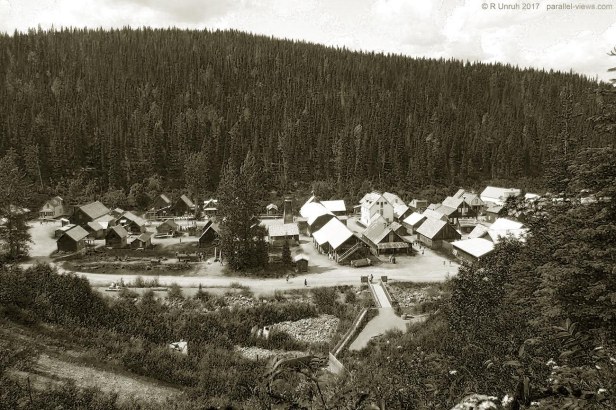 Speaking of UV light, here is the twin in UV. I took this photo with my combined Schott UG11 & BG40 filters. 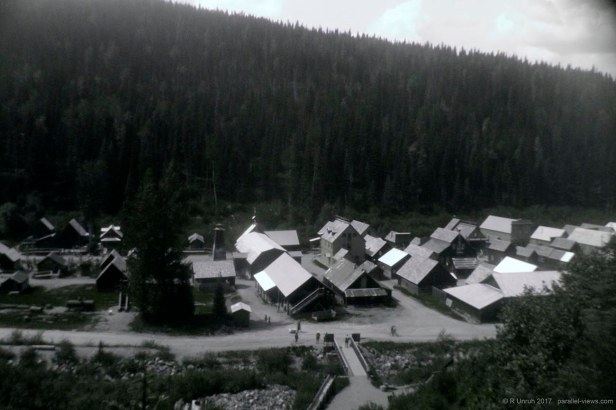 The trees are dark, almost black. The tin roofs do a good job reflecting the sunlight in the UV range. I didn’t have my large aperture lens last year, so used my default 18-55 mm Canon lens to take this photo. That means it was a long exposure- most of the foliage looks blurry, as it was a windy day, and some of there is slight lens distortion and blurring near the edges of the photo.

It was a sunny day at the time(Barkerville is in the mountains, so the weather changes quickly), so I did try to take a triple-stacked photo, combining my short pass filter with the UG11 & BG40 ones. It didn’t turn out great- a very long exposure and filter distortion didn’t help. 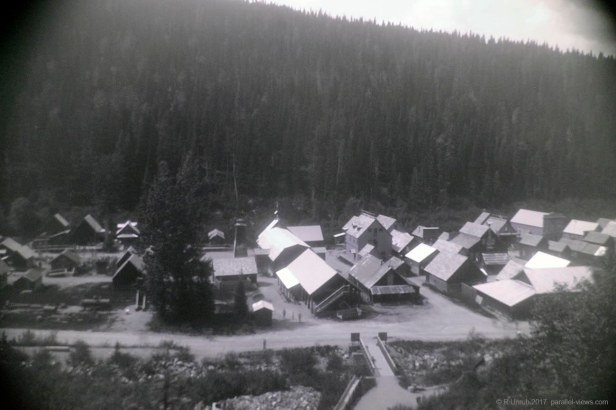 Still, if the blue channel makes a good turn-of-the century photo with a sepia effect added, the triple stacked UV photo does a good job imitating a 1860’s photograph, perhaps on a tintype or Carte De Visite: 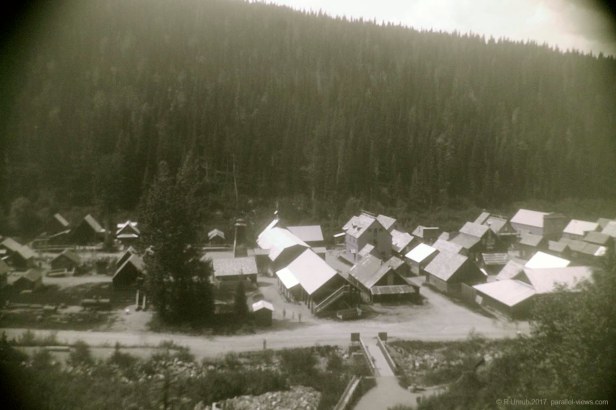 I don’t usually alter my photos to add effects or digital filters, so that’s enough adding colour to photos to make them look old(besides, it’s so easy it gets boring quickly, and I don’t feel like putting in the effort to add scratches and wear).  I could probably play around with the white balance to see the same effect, but lets see one with the default ‘auto’ white balance. 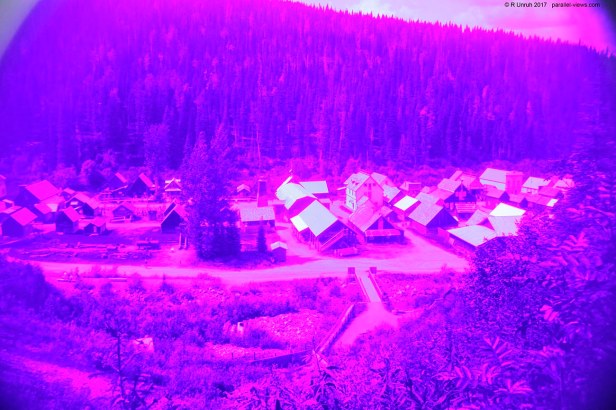 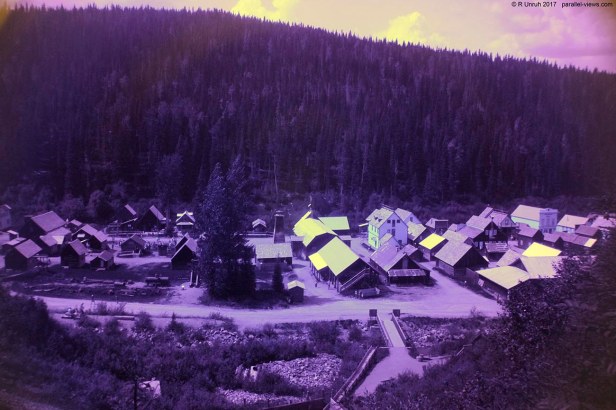 Finally, a photo using just the Schott UG11 filter should wrap up the ultraviolet range. The UG11 filter allows both ultraviolet and infrared light through, but cuts out the visible spectrum. 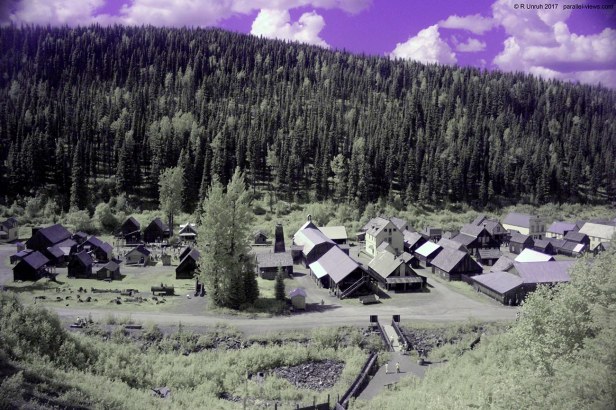 The dual band photos have a nice balance between light and dark Without a filter, my full spectrum camera took this photo: 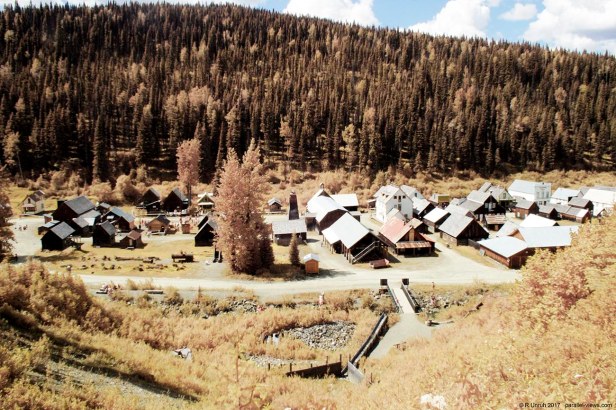 The infrared passing into the camera with a full spectrum photo is strongest on the trees, and the camera interprets it as the trees looking more reddish. As a result, it looks like autumn.

At 950 nm infrared(with a 950 nm Zomei filter), the trees are significantly brighter. There is still a noticeable difference between the deciduous and coniferous trees. 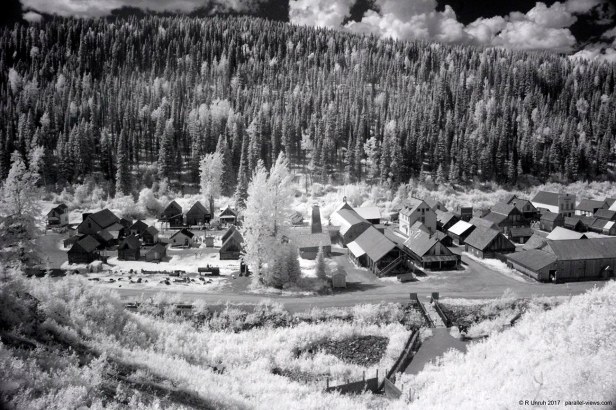 Finally, going deeper into the infrared range,  a thermal photo of Barkerville looks like this:

This is a composite photo; I combined the two halves near the middle of the picture. As I’ve mentioned before, the Seek Reveal camera is low resolution, so the photo isn’t as high quality with the others.

The lighter it is, the hotter the heat signature… mostly. There are multiple black spots in the town. If the above photo is compared with any of the others, it can be seen that the black spots are on the tin roofs, facing the sun. As such, the black isn’t a cold spot, but an area where the infrared heat signature is high enough that the camera can’t interpret it.

Next post- some photos of Barkerville from inside the town.

One thought on “Barkerville- the lookout”