Red/Cyan 3D Glasses are needed to view the following photos.

. Sometimes I plan every stage of a trip, but not always. On my trip to see the eclipse last year, my plan was to be under the eclipse route in Idaho by 10:00 AM. Where specifically was I going to stay? No idea. I can always sleep in my car.  Will there be crowds? No idea. I’ll figure it out when I get there. Will the terrain be clear enough to see the eclipse? Okay, I’ve been there before, and I’m fairly confident I could find a clear area. Traffic? No idea. I’m not on a major route, so hopefully not.

Where was I going next? No idea. I still had a few days of vacation though, so no point just turning back. South looked good; I’ve been on Route 93 since it was Canada’s Highway 93… maybe I  should just continue on it.

… and winging it worked out great. I had a perfect view of the eclipse, and sure, I had to sleep at a roadside rest stop one night, but I also found lots of good campsites. If I had planned the trip thoroughly, I likely would have overspent on accommodations(I found a free campground in Sawtooth National Forest), and I almost certainly would have missed Cathedral Gorge State Park.

I didn’t know about the park ahead of my trip. Located along Route 93 in central Nevada, the park was the first campground I had found after the sun had set, after a long day’s drive. It is between the towns of Pioche and Calliente on Route 93, and near the town of Panaca on State route 319.  By the time I found a campsite, it was too dark to make out any features of the park, although I had a great view of the stars(2D Photo):

The next morning, I explored the park a bit, looking for the ‘caves’ mentioned on the park map. At first, the park looked a bit dull. 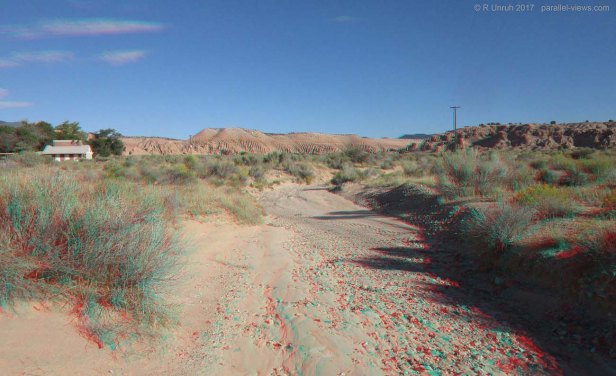 I found it interesting due to how foreign the arid area are- I’m always amazed by how common lizards are in the southwestern USA. Still, the centre of the park isn’t where the ‘cathedral’ is.

Something to mention: many of the pictures in this post are monochromatic. It’s an artistic choice, and seems to add an air of elegance… okay, I’m lying. The sky is the wrong shade of blue, and it makes the 3D photos harder to see in colour. For example, the above photo was desaturated because the colour version look like this:

It looks fine without 3D glasses, but with them on, it looks… weird. If the colours are too close to the colour of either side of the 3D glasses, your brain has a hard time interpeting them; one eye says they’re light, and the other eye says they’re dark.   This effect starts to make the picture hard to see(one of the reasons I rarely wear red clothes when traveling).

But back to the Gorge. I probably would have taken a look at it even if I didn’t camp overnight, just because Cathedral Gorge is an interesting name. And it deserves that name. Between the campground and the highway, there is a steep cliff, eroded into hoodoos and pillars.  There are several trails at the base of the cliff that lead along the base of the cliffs, and plenty of hoodoos. The formations are amazing; each pillar seems so unique.

One of the few man-made attractions along the trail is the abandoned water tower, built by the Civilian Conservation Corps in the 1930s. The water was too alkaline for drinking, and the tower was abandoned. The tower is made of stone, and looks like part of the park.

My favourite adventure in the park, however, was investigating the ‘caves’. At least that’s what they’re called. In fact, they are very narrow slot canyons, caused by erosion. The entrance to them can be a little difficult to find(I never did find the Canyon Caves); the hoodoos hide the canyons behind them. The easiest way was to look for footprints going into the cliffside. Here is the entrance to the Cathedral Caves. 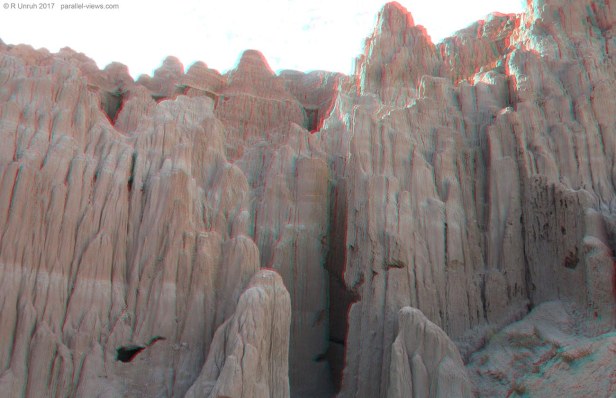 … and here is the entrance to the  Moon Caves 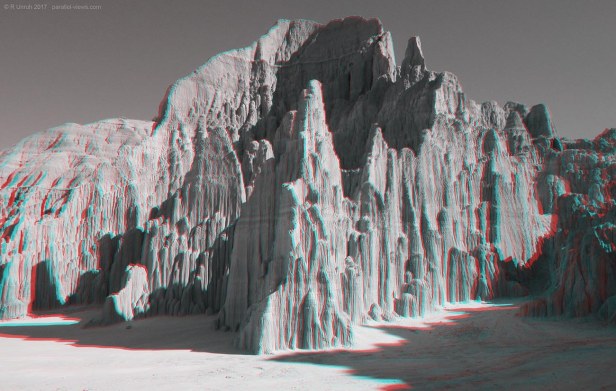 The ‘caves’ start out narrow; the only thing to do is follow them until you reach a dead end or they’re too narrow to continue. 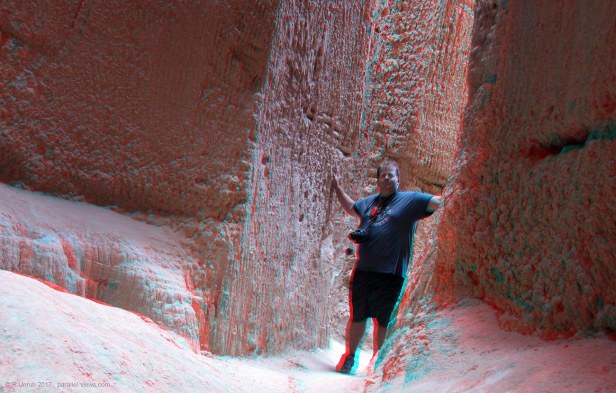 They’re almost entirely open above, so during daytime, there is enough light entering the canyons to explore freely. 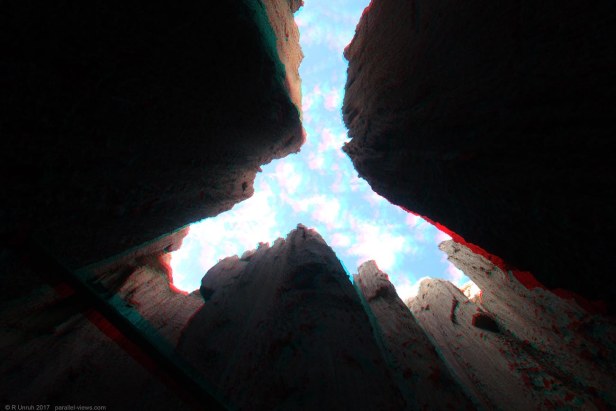 After a morning exploring the caves, I was ready to head out.  Leaving the Moon Caves, I took one last photo looking back out at the park, then continued south.

The above photos were taken with two Canon SX600 HS cameras.

One thought on “3D- Cathedral Gorge”